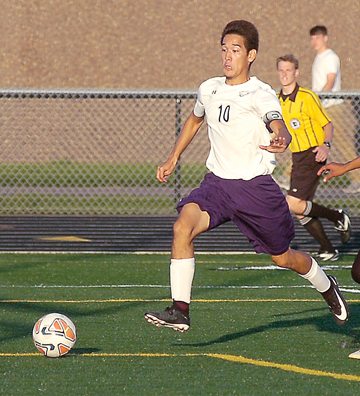 File photo by Steve Muscatello New Ulm’s Wyatt Huard scored 7 goals on Tuesday against Jordan to break the school record for goals in a season. Huard now has 24 goals this year, the previous mark was 18.

NEW ULM — Ever since he was named he found out that he was going to be a captain for his senior year of soccer at New Ulm High School, Wyatt Huard had been on a mission.

Huard became more aggressive offensively and the numbers are staggering. The senior has shattered the New Ulm single season scoring record with 24 goals and it’s believed that his seven goals on Tuesday against Jordan is also a program record.

The 24 goals currently puts him second in the state, according to the website www.mnsoccerhub.com. He trails Nils Gulbranson of Chisago Lakes, who as of Wednesday afternoon was listed as having 26 goals this year.

Huard started the season off with a bang, scoring nine goals in the first two games. He was aware that the team record for goals was 18, which was set by both Broderick Brown and Ben Moldstad.

For Huard, it’s been a season to remember and it all started last fall after the season was over. He was named a co-captain along with Joseph Wessel and Matthew Messenger.

“When coach decided to give me the captain I thought, this is my team, I gotta do something with it this year, it’s my last year of high school,” he said. “It was awesome, I love being in a leadership role, it fits my personality.”

Head coach Dave Dake said that he’s become a more mature player and he’s also a leader for the young squad. He’s always been one of the fastest players on the field, but now he’s put that speed to use to become the go-to guy offensively.

“Wyatt’s got more aggressive and is a more all-around player,” Dake said. “Where I see Wyatt got better at this year was the leadership and being a captain.”

Huard has become the focal point of every defense he goes against, he’s managed to score goals and in bunches.

“The second game of the season, I knew I could get it, I had nine goals after two games,” he said. “After I knew I was capable of scoring five goals, I knew I could do it again later on in the season. I got closer and closer [to the record] and it just drove me more.”

Huard entered Tuesday’s game with 17 goals and the team wanted him to get the record there. He got it and them some.

“It was great, I basically stayed on the line and waited for the team to thread the needle to me and once I got the ball I got the job done,” he said.

As someone who knows about the history of the team, Huard idolized Brown as an eighth-grader. Now Huard is atop the scoring list and with four games left plus playoffs, 30 goals isn’t out of the question.

While he’s not as big as Brown physically, Huard’s speed has helped him become more sure of himself.

“I’m still the same size as I was last year, I think it’s just more confidence,” Huard said. “I play on the field a lot more this year so it’s all confidence.”

Dake said that the scoring record is a result of the team playing better and winning.

For Huard and the Eagles, it was always important to play better than last year and they have done that.

“It’s surprising, because we weren’t a senior-heavy team like we were last year, but we played as a team and managed to get five wins under our belt, which is huge because it’s better than last year,” Huard said.

Huard thinks this team has plenty of potential to make some noise come playoff time. The Eagles could potentially host a first-round game, which would be huge for the team.

“The chemistry is there, we rely a lot on our defense and our defense is like a stone wall back there, they have chemistry and they know how to work the ball together,” Huard said.

The Eagles have two home games left before the playoffs begin. They host St. Peter on Thursday and Worthington on Saturday.