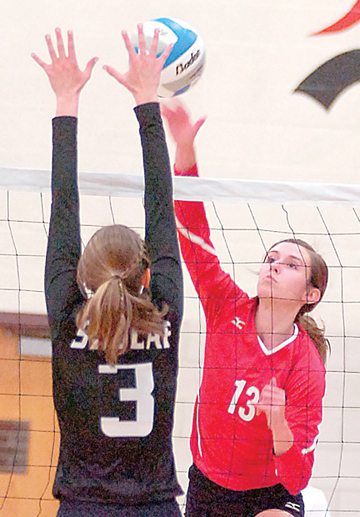 There’s more to Grev than just records and stats though. She also brings leadership, heart and passion.

Those were all common words used to describe Grev by MLC head volleyball coach Becky Cox.

“She’s a complete player,” Cox said. “She is both in the front row and the back row for us and she’s been a key component for our lineup and our program for the past four years. On top of that, she does bring leadership. She’s got a great heart and just a passion for the game. I think that provides a good role model for the rest of the team.”

Grev was honored for her 1,000-kill milestone before this past Monday’s match against St. Olaf. She said that it was great to have all of the support from her coaches and teammates.

“It was really cool,” Grev said. “My team was really supportive and when it happened, they all celebrated for me. So that was really neat to have the support from the team.”

Grev said that she’s been happy with the team and that everyone works hard to bring their best to the court each time they play.

Several things go into making a good player and practice is of the utmost importance. Grev prides herself on striving to improve however she can whenever the opportunity is there.

“I think I try to work really hard both physically and mentally in practice — in season or out of season,” Grev said. “I also try to focus on doing it for my team, so that helps me.”

Cox was pleased to see Grev join an impressive list of players in MLC history and said that Grev is a humble team player.

“That’s a pretty special milestone and as they’ve said, she’s only the fifth person in program history,” Cox said. “Obviously it’s an elite company and I’m very happy for her and for this personal accomplishment. She’s very humble, so I know she’d look at it as just her contribution to the team. And 1,000 digs would put her in even more elite company.”