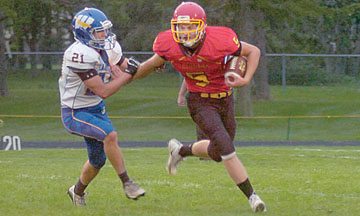 Staff photo by Steve Muscatello Gibbon-Fairfax-Winthrop quarterback Evan Martin tries to get away from Windom Area’s Alex Borgsgard (21) during a run in the first quarter Friday in Winthrop. For more photos of this event go to cu.nujournal.com

WINTHROP — Gibbon-Fairfax-Winthrop fell 36-18 to Windom Area on Friday in its season opener.

The Thunderbirds (0-1) were looking to pick up their first victory since 2014. Despite two late touchdowns to cut the deficit to 10 points, the Eagles (1-0) had other plans in mind.

Munoz led the Thunderbirds with 21 carries for 174 yards, while McKray Schmidt had 14 carries for 98 yards and 9.5 tackles for the defense.

Windom took a 14-6 lead in the second quarter after a 4-yard touchdown pass from Gilbertson to Elder a second time and a successful 2-point conversion. After a GFW fourth-and-2 run went for a loss, Windom got the ball back at its own 47-yard line.

Wyatt Minion then gave the Eagles a 20-6 lead on a 2-yard touchdown run. Minion had 191 yards on 25 carries for two touchdowns.

Gilbertson was 11-for-16 passing for three touchdowns and 155 yards for the Eagles.

Windom took a 28-6 lead in the third quarter on a 3-yard touchdown pass to Minion. That was after GFW attempted to punt the ball on fourth-and-6 and the snap went over the head of the punter, which gave great field position to Windom at the opposing 21-yard line.

Jancarlo Munoz ran 41 yards for a Thunderbirds’ touchdown with 4:54 left in the third to cut the deficit to 28-12. GFW then scored on a 13-yard touchdown pass from Evan Martin to Miguel Munoz on a 90-yard drive to make the score 28-18.

Minion made the Thunderbirds pay again on a 62-yard touchdown run with 2:32 left in the game to give the Eagles the 36-18 score and victory after a two-point conversion.

“We did an excellent job of really sticking together and believing in our systems. There’s no big things to fix — we’re not changing anything — we’re just gonna get better at what we do.”

GFW travels to play Maple River at 7 p.m. on Friday next for a South Central District, Blue Subdistrict game.