Knights put up 15 runs, cruise past Chargers in 4 innings 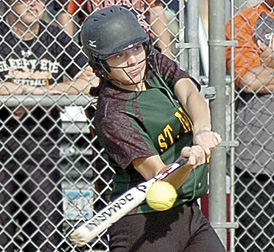 “Anna is our go-to and she has done a nice job this year,” St. Mary’s coach Wendy Owens said. “She has some solid defense behind her and she needs to trust that.”

Leadoff batter Brynja Mielke reached after she was hit by a pitch and took second on a wild pitch with no outs for MVL (4-16). Lauren Paulsen moved Mielke to third on an infield sacrifice for the second out. After giving up a walk after that, Lux recorded her first strikeout to get out of the inning.

The Knights did not allow another MVL runner to reach after the first inning.

St. Mary’s took advantage of errors in the bottom of the first inning, tallying five runs with five hits. Jody Hansen drove in two runs with a line drive into center field during the inning.

“We are going to take advantage when we are allowed to do it,” Owens said.

The Knights added three runs in the second inning with Hansen again driving in two runs on a single.

The Knights added four runs in the third inning all scored with one out. Ali Beltz singled in the inning and advanced on the play to give the Knights two runners in scoring position. A wild pitch pushed Beltz to third and scored the first run of the inning.

MVL starting pitcher Hannah Biedenbender recorded one out in the bottom of the fourth inning before she was replaced by Lauren Paulsen.

MVL coach Barb Leopold said that this team cannot dwell on what happen in the game and credits her young team to be able to recover.

Allison Helget reached on a throwing error to earn an RBI with a second run scored on the play for St. Mary’s. Mallory Helget hit an RBI single to end the game with one out in the fourth inning.

Biedenbender took the loss for MVL, recording one strikeout and Paulsen gave up one hit in a relief appearance.

Dani Weiss was 2 for 2 with two walks scoring four runs and Beltz was 2 for 2 scoring twice.

MVL will take on Mankato Loyola at 10 a.m. Saturday at Caswell Park Field 4 in North Mankato.