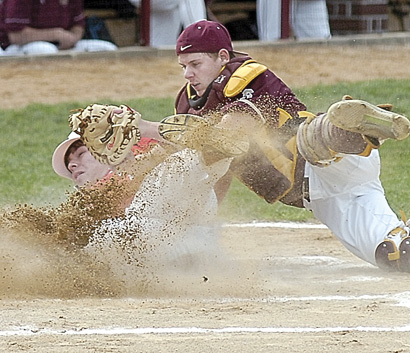 Staff photo by Steve Muscatello Springfield catcher Mason Rummel hangs on to the ball after a collision with Redwood Valley’s Joe Salvati Monday in Springfield. For more photos of this event go to cu.nujournal.com

SPRINGFIELD — Even though the rain came down to crash the party, the Springfield baseball team still kept its bats hot.

Springfield got hits from seven different players in beating Redwood Valley 11-1 in a five-inning nonconference baseball game on Monday at Riverside Park.

The Tigers (15-4), ranked No. 4 in Class A, left Decker Scheffler on third after a double in the first inning but managed to move runners regularly en route to getting the win on the gloomy, chilly afternoon.

“I thought we played real well,” Springfield coach Bob Fink said. “Our small ball was outstanding — it got us our first couple of runs and that just opened it up for our hitters. The momentum started.”

Sophomore Isaac Fink gave up one unearned run in the first inning, but was otherwise lights out on the mound. He retired the side in both the second and third innings on his way to earning the win, having tallied four strikeouts as opposed to two walks in three innings of work.

“He hasn’t been on the mound very much, so it is difficult,” Bob Fink said of Isaac Fink. “I’m sure both him and [Willie] Vanderwerf will have the mindset to attack and if they throw strikes, they’re tough to hit.”

Vanderwerf posted two solid innings of relief, during which he allowed just two hits and notched three strikeouts. After having his junior season cut short due to an ACL tear, Vanderwerf has done all he could to get back to the mound.

“He’s done very well and unfortunately got hurt in that BOLD game [on April 28],” Bob Fink said. “To see him come back the way he has, it’s like he never left the mound. He looks at home there, and we’re going to need him come playoff time.”

Senior Branden Flock delivered an RBI triple that scored the third run of the second inning for the Tigers. Junior Tanner Vogel had a game-high two runs in going 2 for 2, while senior Carter Cook went 2 for 2 with a game-high three RBIs, which included a two-run single in the fourth. Vanderwerf had two RBIs of his own.

Junior Joe Salvati got the loss for the Cardinals (5-14), having given up five runs, three earned on six hits in three innings pitched. Fellow junior T.J. Crews came in and gave up four runs in the fourth inning before senior Calvin Mannz gave up an RBI single to Jon Beadell and a bases-loaded walk to Ben Runck to end the game in the fifth.