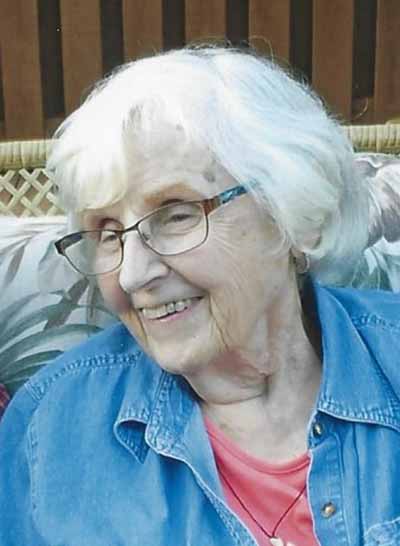 COURTLAND — Lois Hurley of Courtland, Minnesota, died on March 21, 2020. She was born Lois Ilene Engel on November 12, 1930, in a farm house near Peck, Kansas. She attended a one-room school through 8th grade where she graduated at the top of her class… of 1 student. She graduated Mulvane, KS, high school in 1948. Lois attended Emporia State Teachers College before transferring to Kansas State College (now University) in Manhattan where she graduated with honors in 1953 with a bachelor’s in Home Economics Education. She married fellow K-Stater Dr. Glen E. Hurley, DVM, from Brownstown, Indiana, on September 21, 1953.

After two years at Bolling Air Force Base in Washington, DC, where daughter Sharon Ilene was born, and a short stint in Minnesota, Lois and Glen bought a veterinary practice in Boxholm, Iowa, in 1955. There, daughter Shawn Elaine and son Eric Glen were born. Lois was an active leader in the Boxholm Methodist church, sponsored the youth group with Glen, organized and led a Girl Scout program, managed a household with the attached veterinary clinic, managed a farm with Glen, and went back to college at Iowa State University where she earned an M.S. degree in Secondary School Guidance and Counseling in 1973. They fostered three kids, Deanne, David, and Darin Mills.

In 1975, the family moved to Waverly, Iowa. Lois became the Guidance Counselor at Waterloo Columbus High School while Glen joined the Waverly Veterinary Clinic. They became members of Trinity United Methodist Church. They took leadership roles in the church, Habitat for Humanity, the Northeast Iowa Regional Housing Authority, and — a special project for them — volunteered extensively with The Heifer Project for over 35 years.

Lois and Glen “retired” and joined the United States Peace Corps, entering into service in Morocco in 1991. They felt very welcomed by the Muslim community of Rich, Morocco, where they lived and have continued to stay in contact with several people there. They joined Christian Veterinary Mission and became involved with Iowa United Methodist Church mission programs. They spent several months in Kenya assessing and buying goats to provide to people who had lost their livestock in a drought. Also, they spent a cold winter in Ulaanbaatar, Mongolia, operating a clinic designed to provide local veterinarian students the opportunity for practical experience prior to going out on their own. They worked shorter stints in Ghana, El Salvador, Jamaica, Guatemala, Granada, Costa Rica, and Puerto Rico. Not bad for a couple of depression era farm kids from Kansas and Indiana.

Lois was preceded in death by her parents Amy Esther Shoup Engel and Earl Engel and by her sister Dorothy (Engel) Parker and brother-in-law Bill Parker. Lois is survived by her husband Glen, their children Sharon Hurley (Dave Linn), Shawn Snyder (Pat), and Eric Hurley. They have four grandchildren, Amy Heitman (Chris), Daniel Snyder (Becky), Danielle Linn, and Tyler Linn (Breanna). They also have six great grandchildren Olivia, Owen, Lyra, Declan, Liam, and Madi, and with one more on the way.

A family remembrance will be held by First Congregational United Church of Christ, Mankato. To sign the online guestbook, or send condolences to her family, please visit: MVFH.org. Please send any memorials in Lois’s name to Heifer Project International or donor’s choice.