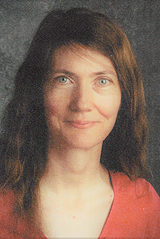 To leave an online condolence for her family or to sign the guest book go to www.mvfh.org

Kathryn Rene Smith was born May 25, 1964. Her father, Rev. John P. Meyer, was a WELS pastor serving then in Friesland, Wisconsin. Kath is the granddaughter of Rev. Louis Meyer (WELS) and the great-granddaughter of Rev. Carl Waidlich (old Michigan Synod and WELS). Her mother, Barbara (Eastwood) Meyer, was an RN and hospice nurse and administrator. Kath (she disliked any nickname apart from Kath) was the fourth of eight children. When she was 2 they moved to Rib Lake, Wisconsin, following her father’s call to St. John’s Lutheran, Rib Lake. She attended grade school and high school there, where she enjoyed band (french horn), choir, drama, and running cross-country. She attended college first at Washington University in St. Louis, Missouri, and graduated with a BA in theater 1986. From there she enrolled in the University of Wisconsin, Madison, and earned another BA in teaching theater and math. While there she met and worked with Bob Fosse, a world-renowned dancer and choreographer.

She taught in Texas in The Woodlands outside of Houston, teaching drama and coaching soccer, and took a year off from teaching in 1992, working as an accountant for Derco Aerospace in Milwaukee. It was at this time that she met her future husband, Timothy Smith, when he cast her as one of the daughters of King Lear for a Northwestern College production. They were in several plays together there in which she usually starred (notably South Pacific), and eventually they fell in love and got engaged in April, 1995, while sharing the leading roles in Henry V. They were married later that year, on Dec. 30, 1995.

When Tim graduated from the seminary in 1999, he was assigned to be a missionary in the Pacific Northwest. They packed up their first two babies, Jon (born 1996) and Ben (born 1999) and moved to Maple Valley, Washington. They returned to the Midwest when Tim was called to St. Paul’s, New Ulm, Minnesota in 2001, shortly before Peter was born. A fourth son, Eric, followed in 2005.

Kath attended many Bible studies, sometimes going to four or even five in a single week. She taught Sunday School, and loved being a paraprofessional at St. Paul’s Lutheran School and later at New Ulm Middle School. She sang in the choir, and attended virtually every game, meet, event, and performance her sons were in, always with her VHS camera in hand, and was especially delighted in their artwork which she hung up and displayed everywhere in their little home on Jefferson Street. Kath tirelessly edited her husband’s daily e-mail devotions, and looked up every single passage he referenced to make sure he got the chapter and verse correct.

In 2019, she contracted pancreatic cancer, and she was gathered to heaven by God on Feb. 7, 2020 while with her husband and sons. The time of her sojourn on earth was 55 years, 278 days. The number of her friends is uncountable. The strength of her faith is impregnable. The condition of her soul is immortal.