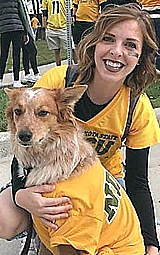 Rachel Susan Vath, age 28, of Saint Paul, passed away Jan. 30, 2020, at the end of her nine-year journey with breast cancer. After graduating from Rosemount High School in 2010, Rachel attended the University of Wisconsin – Eau Claire, where she played Division III hockey. Rachel was diagnosed after her freshman year in 2011 at age 19. After surgery and treatment, in 2013 she moved to California to begin the next chapter of her journey, in remission. In January of 2015, it was discovered that Rachel’s breast cancer had moved into her bones. She moved back to Minnesota and began treatment, in addition to multiple surgeries including a hip replacement. Despite all of these challenges, in 2016 Rachel made the decision to apply to Dunwoody College of Technology. She was accepted into their Radiologic Technology Program which only accepted 11 candidates that year. While attending school, she worked at Lifetime Fitness in Eagan. After graduating in 2017, with an Associate of Applied Science Degree, she began her new career with both Southbridge Urgent Care in Shakopee as a full-time x-ray tech, and as a casual x-ray tech at Children’s Minnesota. In 2019, she began working full-time solely at Children’s MN in Minneapolis where she worked up until Dec. 26 of last year.

Throughout the many facets of her life, Rachel was very passionate about traveling near and far including California, Idaho, Florida, Greece, Costa Rica and multiple cruises. While home, she loved baking, cooking and managing a very organized household. Her most precious times were spent with family and in the summer would include going to Fox Lake and camping around the state. In the winter she enjoyed hosting company, going to her younger brother’s wrestling matches, playing board games and sitting by a warm fire, especially with her sister. For the last three years, Rachel lived in Saint Paul with her beloved boyfriend Jon Rans, as well as her big brother and her two adored kids, Peanut (dog) and Jelly (cat).

Memorial Mass of Christian Burial for Rachel will be held on Friday, Feb. 14, 2020, at 11 a.m. at St. Joseph Catholic Church, 13900 Biscayne Avenue West, Rosemount, Minnesota 55068 with a gathering of family and friends one hour prior to service at church. Memorial Visitation will take place on Thursday evening, Feb. 13, from 4 to 8 p.m. at White Funeral Home, 14560 Pennock Avenue, Apple Valley.

In lieu of flowers, the family requests donations in Rachel’s honor to breast cancer research. These are suggested organizations:

Kobe Bryant among 8 finalists for Basketball Hall of Fame