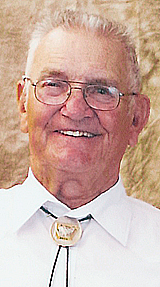 Bobby Dean Neidecker, 83, of Van Buren, Arkansas, passed away peacefully on Sunday, Jan. 12, 2020, at home and surrounded by loved ones. He was a lifelong resident of Crawford County, Arkansas, a cattle farmer and businessman, a member of New Hope United Methodist Church in the Oak Grove community, and a 1955 graduate of Van Buren High School.

He was preceded in death by his parents, John Joseph (Driscoll) and Allie Viola Hurst Neidecker; five brothers, Harold, Leonard, Johnny, Clayton, and Therol (Doc); and his wife of 54 years, Carol Jean Daugherty Neidecker. He is survived by his four children and their spouses, Brad and Glenda of Springdale, Tim and Chansouda of Van Buren, Stan and Beth of Spring Hill, Kansas, and Kimberly and Todd Mapes of Rogers; one brother, Gene of Van Buren; three sisters, Sandra Goodman of Alma, Frances Childs of Roland, Arkansas, and Wilda Ginn of Heber Springs; and his wife, Debbie. He is also survived by eight grandchildren and three great-grandchildren.

A celebration of his life will be held Saturday, Jan. 18, at 11 a.m., at Ocker Memorial Chapel in Van Buren. Burial will be at Gill Cemetery in Van Buren under the direction of Ocker Funeral Home.

Pallbearers are two of his grandsons, Jacob and Ethan Neidecker, and four of his nephews, Bruce, Mark, and Scott Neidecker and Michael Ward.

Honorary pallbearers are his square dancing and domino friends.