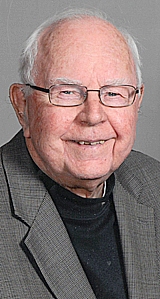 He was preceded in death by his wife, Joan Vandehaar; parents; and his brother, Carl (Val) Norman.

Roger O. Norman was born April 9, 1929 to Peter and Kate (Huygens) Norman in Chicago, Illinois. He grew up working with his father on the family truck farm in Chicago. Growing and selling produce instilled in him a love of gardening and soil that lasted throughout his life. He continued to tend his own very productive garden last summer.

Roger attended Central College in Pella, Iowa from 1947-1951. During that time, he met Joan Vandehaar. Roger finished his education in 1952 at Iowa State University with a degree in Agronomy and worked for Quaker Oats in Armstrong, Iowa. In 1954, Roger was united in marriage to Joan in Oskaloosa, Iowa and they relocated to New Ulm. Roger then started working for International Mineral and Chemical selling fertilizer and was a certified professional agronomist from University of Minnesota. He also worked as an Agronomist at Minnesota Valley Testing Labs, as a Realtor at Koeckeritz Realty, and as a Farm Manager for Vandehaar Farm in Leighton, Iowa from 1979-2013

Roger participated in numerous organizations, including the Lions Club and Lind House Board. He served in numerous capacities at First United Methodist Church, especially enjoying his time with the Lord’s Laborers.

Roger was at peace knowing that God was in control. He was extremely grateful for the love and compassion shared with him the last months of his earthly life. He never neglected to say “thank you so much” to each and every person who cared for him or visited him.