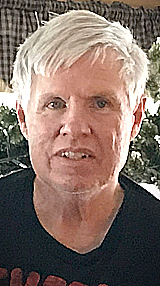 Alan Budahn, 71, of New Ulm, died January 12, 2020 at the Lakewood Health System in Staples, MN after a short but fierce battle with dementia. Alan was born on October 10, 1948 to Lewis and Therese (Harens) Budahn in Glencoe MN. The family lived in Arlington, MN prior to moving to New Ulm in 1959. Alan graduated from New Ulm High School, Mankato State University and attended Texas A & M Graduate School. While in Texas Alan met Barbara Harrington. They were married in 1972. Alan spent most of his adult life living in Minneapolis until his retirement when he returned to New Ulm.

Alan enjoyed all types of sports but was especially a fan of the Racine Raiders Football team and the St. Paul Saints Baseball team. He also followed several semi-pro football teams. He loved to talk sports with anyone with the same passion.

A Celebration of Life for Alan will be held at a later date.