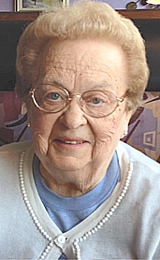 Margaret was born May 11, 1922 in Sobieski to John and Rose (Wysniski) Sobiech. On Feb. 18, 1946 Margaret married John S. Symanietz. The couple resided in Duluth for a number of years before moving to Milaca where they operated the Milaca Hardware Store. Following John’s death in 1969, Margaret worked at Milaca Mills for 15 years while raising her four children, each of whom she supported through college. Her love of dancing led her to meet her second husband, Minnesota Hall-of-Fame concertina player Elmer Scheid. Following their marriage in 1977, the couple lived in New Ulm for 28 years.

Margaret will always be remembered for her delicious apple pies, her homemade Polish dill pickles, and her love of gardening. Margaret is preceded in death by her first husband, John S. Symanietz, her son John A. Symanietz, and her second husband, Elmer Scheid, her daughter-in-law Patti (Fleury) Obie, and Patti’s son, Danny Fleury.

Margaret was a member of Sacred Heart Catholic Church in Fleming Island, FL.

A Catholic Mass celebrating Margaret’s life and a private burial are being planned later this spring. In lieu of flowers, donations may be made to the Leukemia & Lymphoma Society.