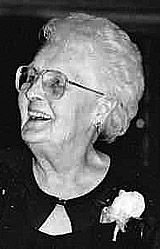 Memorial Service will be 2 p.m. Sunday, Dec. 1, at First Lutheran Church in Lafayette with Pastor Heidi Hagstrom officiating. Interment will be at a later date.

Gathering of Family and Friends will be one hour prior to the service at the church on Sunday.

Edna Vivian Sandquist was born on Oct. 11, 1920, in Gibbon. She was the daughter of Sigfred and Cecelia (Holmgren) Kent. Edna was baptized as an infant and was later confirmed in her faith as a youth. She received her education in Gibbon and was a graduate of the Gibbon High School. Edna grew up in Gibbon and resided in Lafayette all of her married life.

On Sept. 19, 1940, Edna was united in marriage to Roy Arlandson at Clear Lake Swedish Church, rural Gibbon. This union was blessed with one son, John. Roy and Edna purchased the hardware store in Lafayette. Roy Arlandson passed away in March of 1964, after which Edna continued living in Lafayette.

On Nov. 11, 1966, Edna was united in marriage to Donald Sandquist at Bernadotte Lutheran Church in Bernadotte Township, Nicollet County. After their marriage, the couple lived on a farm north of Lafayette.

Edna enjoyed embroidering towels, making Halloween costumes for her grandchildren, quilting at church, playing cards, taking road trips, and traveling to warm states with family. She always had a project going. Edna was very proud of her Swedish heritage and enjoyed baking Swedish dishes and desserts. Edna enjoyed daily coffee with her friends in Lafayette.