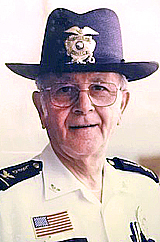 Memorial services will be 11 a.m. on Friday, Sept. 20, at the First Lutheran Church in Le Sueur with Rev. Carl Bruihler officiating. Visitation will be one hour prior to service time at the church. Inurnment will be in the New Ulm City Cemetery at a later date.

He married Rosemarie Grötsch on March 29, 1956 in Germany. Together they moved to New Ulm, Minnesota in 1959. There he worked for Brown County as Captain Deputy Sheriff. In 1975 they moved to Le Sueur where he served as Police Chief for many years, retiring in 2000.

Harry was a member of First Lutheran Church and former member of the LeSueur Rotary Club. Harry was an avid reader, enjoyed police shows on television and playing with remote control toys of all types. He had a particular interest in electronic gadgets and kept up on what was new.

Harry is survived by his daughter, Janice (Laurie Palmer) Thorau of Columbia Heights. Also surviving is a sister Erika Grant of Papillon, Nebraska and a half-sister, Heika Thorau of Germany.

He is preceded in death by his parents; and wife, Rosemarie in 2018 and a brother, Bendt Thorau.