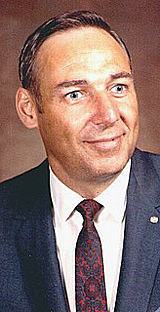 Ben Thompson was born on 21 February, 1933 to M.B. and Margaret Weick Thompson, in Austin, MN. He spent his younger years in Austin and Chicago, Illinois. When he was a Freshman in high school, his family moved to Fremont, Nebraska. After graduating from high school in Fremont, he was appointed to the United States Naval Academy. He played basketball for Navy and graduated with an engineering degree. He was the engineering officer on the USS Frank E Evans and the USS Little Rock before going to work for 3M in 1960. His career with 3M spanned 35 years.

In New Ulm Minnesota, Ben was not content just running a successful operation for 3M. Many of the communities he lived in benefited from his service. He was senior warden at his church, a Mason and a Shriner, Rotary club president, a member of the Chamber of Commerce, Country Club director, Toastmaster’s Club President and a member of the hospital board.

Ben was known to his friends and family as Big Ben and Gentle Ben. He loved to play golf, hunt and fish. During his retirement, he scored two holes in one at the golf courses at the Hills of Lakeway.

Memorial gifts may be made in Ben’s memory to the Lakeway Church or to the Austin Humane Society.