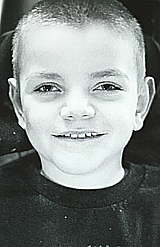 Visitation will be 4-7 p.m. Monday, September 16, 2019 at the Minnesota Valley Funeral Home – SOUTH CHAPEL in New Ulm. A Time of Sharing will be held at 7 p.m. on Monday.

Keegs was preceded in death by his grandpa, Ed Haag of North Mankato.

Keegan was born on January 8, 2010 in Mankato to Cala Haag. He had an indescribable personality. His charisma was beyond amazing. Keegan’s laugh and smile were contagious, but his eyes were striking enough to steal your heart. Keegs was an amazing boy who could captivate and inspire anyone who ever met him and then some. He enjoyed going to school and listening to his friends read to him and hold his hand. His friends would argue who would get to be his buddy that day and push his wheelchair. Keegs kept his mom on her toes and not a day went by that he didn’t know the purest form of love.

Keegan fought a rare genetic disorder his entire life but continued to stay strong until the end. Keegan always had a way of rewriting life’s plan. He was a force to be reckoned with. His mom always described him as the “perfect storm.”

Keegs will be greatly missed by his mom, brother, grandparents, uncles, family, friends, and his four-legged body guard, Diesel.