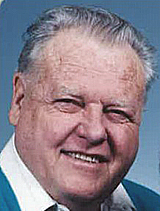 Graveside Service will be held in Home Cemetery, on Monday, Aug. 12, at 3 p.m.

The clergy will be Pastor Nathanael Mayhew.

Arrangements are with the Sturm Funeral Home in Sleepy Eye. On line condolences may be left for the family at www.sturmfh.com.

Robert “Robbie” Dean Schwint, 88, passed away on Aug. 1, 2019. He was born on February 28, 1931 in Sleepy Eye the son of Frank and Theo (Stowell) Schwint. He was a 1950 graduate of Sleepy Eye High School and served in the US Navy during the Korean Conflict. Robert married Janet Mickelsen on Nov. 7, 1953 and God blessed the union with three children. Robert worked for John Deere and walked a mail route for the USPS for 37 years. Robert loved camping, fishing, hunting, playing cards, and fixing small engines. He was a member of the Lion’s Club, Servicemen’s Club and V.F.W where he served as commander. He was a member of Trinity and Grace Evangelical Lutheran Church.

Family and friends are invited to Grace Evangelical Lutheran Church after the service for Robert’s favorites: dessert and strong coffee.