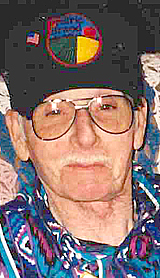 Visitation will be from 4 to 7 p.m. on Friday and will continue on Saturday from 9 until 10 am at the Sturm Funeral Home, Sleepy Eye.

Memorial Service will be held at the Sturm Funeral Home, Sleepy Eye Chapel, on Saturday, Aug. 10, 2019 at 10 am. The clergy will be Pastor Nathan Luong. Interment will be in the Morgan City Cemetery in Morgan. Military rites will be provided by the Sleepy Eye Honor Guard.

Reception to be held at the Railway Bar & Grill following the burial.

Donald “Don” Edward Hale was born May 20, 1933 in Eden Township, Brown County to Edward and Belle (Kuelbs) Hale. He worked at Battig Sawmill north of Sleepy Eye and Del Monte. Don married Velma Waggle on May 13, 1956. Don was drafted into the Army in 1957. Velma joined Don and they lived in Kansas City, KS; Fort Carson, CO; and other cities as he was moved around in the Army. Don served until the death of his father in 1959 and received an honorable discharge from the Army at that time. Don then took over the operation of the family farm with his mother. In the late 1970’s, Don opened Hale’s Welding & Repair Shop which he ran for many years with his son Lee. Don loved to hunt, especially pheasants. One of the best memories is the first deer he ever shot on a trip up north with his son and grandson, Dustin. Don was known for his stories and enjoyed visiting with his family, friends, and neighbors.