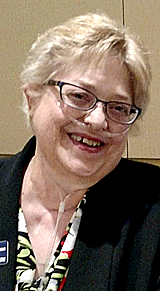 Colleen M. Lindstrom, 63, of Willmar, died Tuesday, May 14th, at her home. Mass of Christian Burial will be 11:00 am, Monday, May 20th at Church of St. Mary in Willmar. Burial will be in St. Eloi Catholic Cemetery in Ghent. Visitation will be from 3 – 5:00 pm, Sunday at the church and continue one hour prior to the Mass on Monday at the church. Funeral arrangements are with Harvey Anderson Funeral Home in Willmar. www.hafh.org

Colleen Marie was born May 7, 1956, in Marshall, Minnesota, the daughter of Clarence and Louise (VanDorpe) Stassen. She grew up in Minneota where she attended St. Edward’s Parochial School and graduated from Minneota High School in 1974. She continued her education at Willmar Area Vo-Tech where she earned her LPN. Following graduation, Colleen worked as an LPN at Rice Memorial Hospital until 1987 when she could no longer be in healthcare because of her own health.

On May 21, 1983, she was united in marriage to Randall Lindstrom at St. Edward’s Catholic Church in Minneota. They continued to live in Willmar following their marriage.

Colleen was baptized and confirmed at St. Eloi Catholic Church and ever since moving to Willmar has been a member of Church of St. Mary. For many years she was a Catechist before becoming the Religious Education Principal for which she was for 29 years.

Her family recalls her love of the church and her faith. Colleen gave all she could give, going beyond what she probably physically should have done, for the children in Religious Education. She enjoyed reading romance novels and cherished the time she could hear Randy and Chris singing along her side. Colleen was great baker and cherished the time spent with her grandchildren in the kitchen teaching them to bake. There will be many Catechists who will miss the baked goods she always brought to religious education each week.

She was preceded in death by her son, Nicholas in 1987; father, Clarence Stassen and father-in-law, Eldon Lindstrom and brother-in-law, Keith Lindstrom.