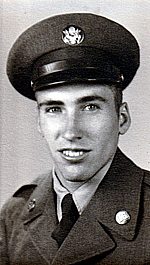 Funeral service will be 10:30 a.m. Monday, Oct. 23, 2017 at Redeemer Lutheran Church in New Ulm with Pastor Grant Bode officiating. Burial with military honors accorded by the New Ulm Area Comrades of Valor will be in the Cambria Cemetery.

Visitation will be 4-7 p.m. Sunday at the Minnesota Valley Funeral Home, SOUTH CHAPEL, in New Ulm and will continue for one hour prior to the time of service at the church on Monday.

To leave an online condolence for his family, or to sign the guestbook, go to: www.mvfh.org

Myron is survived by his sons, Jon (Jennifer) Kassen of Racine, WI, and Dale (Mary) Kassen of Lakeville; grandchildren, Jenna Kassen and Jonah Kassen; sisters-in-law, Janice (Bud) Rehder of Red Wing and Eleanore Barnes of Nebraska; and many nieces and nephews.

He was preceded in death by his wife, Audrey in 2015; his parents; his brothers and sisters, Willard, Mildred, Orville, Lyla, Mable, Ruth, Luola, Eddie, and Vernon.

Myron Allen Kassen was born on Nov. 14, 1931 in Waconia to Ernest & Mary Kassen. He grew up in Cologne, MN. Myron served in the U.S. Army during the Korean War from 1952 to 1954. On June 23, 1963 he was united in marriage to Audrey Gersch at the Zion Lutheran Church in Lewisville. From 1957 until his retirement in 2004, Myron worked as an auto body technician at various auto body shops in Mankato and Madelia. Myron enjoyed fishing, hunting, and spending time at the lake cabin. He was a member of Redeemer Lutheran Church in New Ulm.

Memorials are preferred to St. Croix Hospice or Kinder Haus.