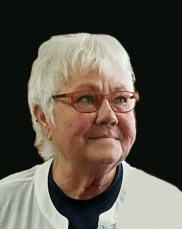 Visitation will be on Friday, August 18, 2017 from 4 to 7 pm at the Sturm Funeral Home, Pilgrim Chapel and will continue Saturday from 9:30 am until 10:30 am at the St. Mary’s Catholic Church, Madelia.

The clergy will be Father Andrew Beerman. Interment will be at the Calvary Cemetery in Madelia.

Arrangements are with the Sturm Funeral Home, Pilgrim Chapel. Online condolences may be left for the family at www.sturmfh.com

Gloria Jean Harris was born on May 17, 1941, in Madelia, Minnesota the daughter of Earl “Sonny” and Inez (Franke) Harris. She attended and graduated from Madelia High School. Gloria met and married Thomas Eager on July 29, 1961 at the St. Mary’s Catholic Church in Madelia. Together they lived in Madelia until a house fire in 1962 and relocated to California, returning back to Madelia in 1972.

Gloria worked as a school bus driver for 20 years and served as a matron at the Watonwan County Sheriff Department. She was active in the church playing organ for over 20 years. Gloria was a former Girl Scout leader, member of the American Legion Auxiliary, and ran the campground with her husband, Tom, for 8 years. In 2007 Gloria received the Oscar Sorbel Hometown Hero Award for her years of volunteer contributions to the Madelia community. Gloria enjoyed regular games of cards with her friends, and her proudest accomplishment was extensive work as the founder of the Madelia Veterans Memorial.

Gloria is survived by her children, Johanna (Jill) Eager of Seattle, WA, and John (Jen) Eager of Lewisville, grandchildren, Dalton and Brandon Eager, and many nieces and nephews. She was preceded in death by her parents, husband, Tom, sister, Carol and 2 infant children.