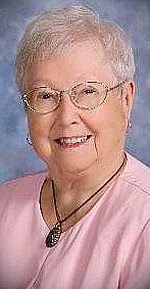 FAIRFAX — Mae Marwede, age 95, of Fairfax, passed away on Saturday, August 12, 2017, at the Renville County Hospital in Olivia.

Funeral Services will be Thursday, Aug. 17, 10:30 a.m. at St. John Lutheran Church in Fairfax with Pastor Scott Muske officiating. Interment will be in the church cemetery.

Visitation will be held Wednesday, Aug. 16, from 5 to 8 p.m. at the Hauser-Hantge Funeral Chapel in Fairfax and will continue one hour prior to the service on Thursday at the church.

Mae Eleanor (Dahlgren) Marwede was born on May 29, 1922, to Alvin and Beda (Johnson) Dahlgren of Bird Island. She was baptized on July 9, 1922, at the Palmyra Lutheran Church and confirmed in her faith on Oct. 25, 1936, at Our Savior’s Lutheran Church in Bird Island. Her confirmation verse was John 14:1-2 “Do not let your hearts be troubled. Trust in God; trust also in me. In my Father’s house are many rooms; if it were not so, I would have told you. I am going there to prepare a place for you.” Mae’s confirmation song was “My Jesus I Love Thee, I Know Thou Aren’t Mine.”

She attended four years of country school district #46, walking daily a mile each way. When the bus system was established, Mae went to the Bird Island Public School. She was very involved in school; played the trombone in band, school plays, girls’ basketball and track. She graduated with honors from high school in 1940.

She was a member of Palmyra Willing Workers 4-H club, played 4-H softball, and won a trip to the Minnesota State Fair to show her prized pig.

Following high school Mae attended the University of Minnesota Farm School for a year and later worked for Brown & Bigelow Company during the war years as a navy inspector for the 60 millimeter fuses for rockets that the navy used.

Her fiancé, Willis Marwede was stationed in India during World War II. Upon his return the couple was married on June 8, 1946, at Our Savior’s Lutheran Church in Bird Island. They were blessed with four children, Lynda, Lee, Carla, and Cal. Willis worked at the Dickmeyer Motor Company and later as Vice President at Citizen’s State Bank. Mae and Willis celebrated 42 years of marriage, before Willis passed away on Aug. 7, 1988.

Mae was an active member of St. John Lutheran Church, Choir, Couples Club, and Ladies Aid. She was also a member of the Legion Auxiliary and a Treasure Haus Volunteer.

In their later years, Willis and Mae enjoyed being at the lake and traveling to the Scandinavian Countries, Ireland, Germany, Austria and Hawaii. Mae enjoyed gardening, especially her flowers and roses, sewing and fishing. She enjoyed her four children, eight grandchildren and four great-grandchildren.

After leaving her home in Fairfax she spent a year at Countryview Estates in Fairfax and her last year was spent at the Fairfax Community Home.