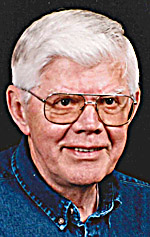 The funeral Mass for Chris Healy will be at 11:30 a.m. on Friday, January 20, 2017 at the Holy Family Catholic Church in Kasson with Father Paul Surprenant officiating.

The visitation will begin at 10 a.m. at the church. Burial will be in St. Michael Catholic Cemetery in Kenyon.

Chris died Jan. 15, 2017, peacefully at home after a long illness, surrounded by his beloved family. He was born Oct. 12, 1933 in Eyota, Minnesota, to John Raymond Healy and Dorothy Catherine Waters Healy. He attended school in Chatfield and one year at Lourdes High School where he had a locker next to his future wife. He was in the Navy from June 1951, to August 1954, during the Korean War, where he served aboard a minesweeper.

On May 21, 1955, Chris married Shirley Hanson of Rochester, daughter of Norman and Marge Hanson, and worked at Gopher Aviation in Rochester until going to college at Mankato. They moved to New Ulm where he worked for B. F. Goodrich until 1982. He then worked for Pantasote but moved to Kenyon where they lived until 2005. From 1991 to 2000 he had his own business. After retiring he and his wife moved to Kasson to a smaller home. His four children grew up in a beautiful country home that he helped build in New Ulm. The kids were fortunate to grow up next to an awesome family of nine kids. He loved spending time with his family.

He enjoyed traveling, camping, gardening and working outside. They always had dogs, usually boxers, that they enjoyed taking to shows. During retirement, his favorite activities were the early morning cups of coffee with Wayne and Harvey and their once a week “fishing trips” at the Ellingson pond.

Survivors include his wife, Shirley; their son, John Raymond, Red Wing; their daughters, Denise Marie (Roger) Ellingson of Dodge Center; and Susan Ann (David) Fluegel of Kenyon; nine grandchildren; 14 great grandchildren, and many nephews and nieces; his sister Dorothy (Tony) Passion of Portland, OR. He was preceded in death by their son, Joseph, two brothers, and three sisters.

Byron Funeral Home is in charge of the arrangements and online condolences are welcome at www.byronfuneralhome.com.