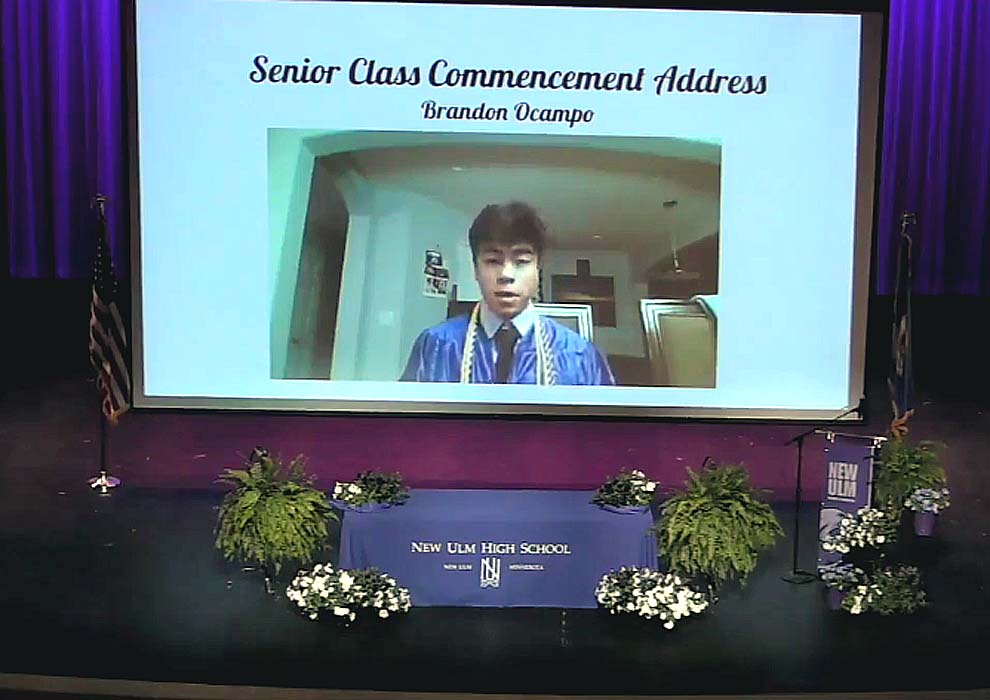 In this photo taken from video, Brandon Ocampo talks to members of the New Ulm High School Class of 2020 during the virtual graduation ceremony held Friday night. The ceremony can be viewed at https://www.youtube.com/watch?v=MvlD-i2nJCQ.

In this photo taken from video, Brandon Ocampo talks to members of the New Ulm High School Class of 2020 during the virtual graduation ceremony held Friday night. The ceremony can be viewed at https://www.youtube.com/watch?v=MvlD-i2nJCQ.

Dakota Savoy, a member of the New Ulm High School Class of 2020, was the guest of honor as a parade of friends and family passed by her house Friday to wish her a happy graduation. The NUHS graduation ceremony was presented online Friday evening.

NEW ULM — New Ulm High School’s held it’s graduation ceremony Friday. It was the 135th graduation from the school and the first to be held online for social distancing.

Graduates and their families were able to stream the online ceremony starting at 7 p.m. from the school’s website. The ceremony will remain for those unable to watch it live.

The ceremony began with a slide show featuring senior pictures of each grade displayed in pairs. The pictures flashed on the screen as the classic graduation march “Pomp and Circumstances” played.

After the march, a video of senior Hayleigh Hazen was shown as she welcomed everyone to graduation. Hazen opened by acknowledging the unusual circumstances before thanking all the parents, guardians and teachers for helping everyone get through this difficult year.

Superintendent Jeff Bertrang said in his speech that the Class of 2020 was thrown a curveball. “Things that are taken for granted were taken from you,” he said. Bertrang asked the graduates to not let this spring define them. 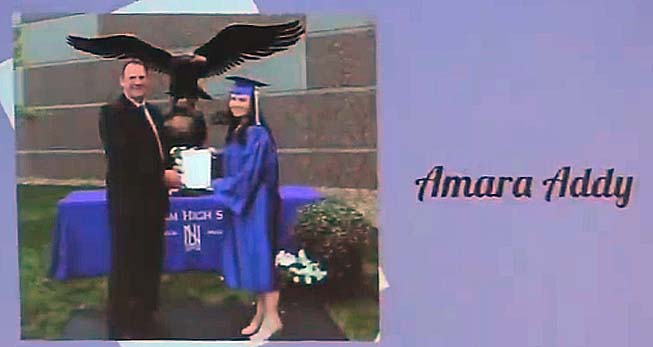 Social Studies teacher Rob Bute was selected by the class to speak. He told the graduates he felt something was missing from this experience. The students were not in the room together. They could not all throw their hats in the air as a group or take photos together after the ceremony.

“There is no way to sugarcoat the reality we are living in,” he said. The loss of life and economic security caused by COVID-19 were extreme and the loss of a traditional high school year may seem trivial, but he disagreed. “It is not wrong to feel sad. You have earned the right to be sad and graduation is a big deal.”

Bute said the Class of 2020 was robbed of a senior year and it was unfair that history had chosen this class. He encouraged the students to embrace it as other classes had.

Bute spoke of the Class of 1942 graduating months after the bombing of Pearl Harbor or the Class of 2002 who graduated after seeing the 9/11 terrorist attacks. He said those students embraced the history of the moment by joining the military or medical field. He asked the class of 2020 to embrace their moment in history.

Bute said young people are flexible and their embrace of distance learning was beyond what many adults were capable of. “You are the most educated generation in history and that gives me hope,” he said. 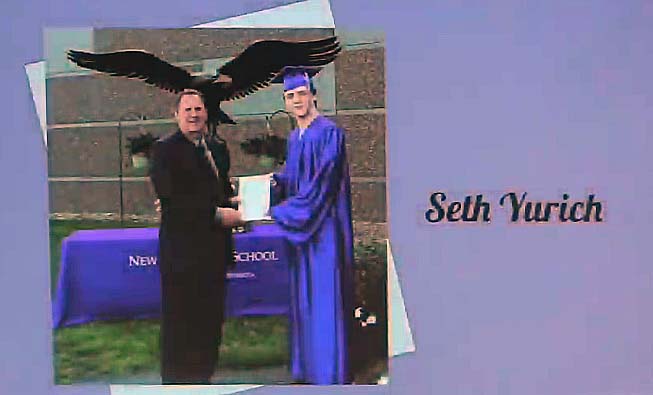 Class speaker Brandon Ocampo addressed his class through a pre-recorded video speech. He admitted this year was the first time since elementary school he missed being able to come to school.

Ocampo said his class was living through history; especially in New Ulm. The Class of 2020 was the first class to attend all four high school years at the new building, but he acknowledges the class was unlucky. His class had seen many changes throughout the school year, which included changing academic requirements and finally a global pandemic.

Ocampo said through these struggles it was clear to him the students were a family.

“I think life is what you make it,” he said. Ocampo encouraged his fellow students to look past what happened this year and say thank you. “We have time to make it up”

Ocampo said he hoped to someday have a proper celebration with his peers but also hoped to show the world how great the Class of 2020 can be.

The program closed with a photo montage of each student in their purple graduation robes accepting a diploma from Principal Mark Bergmann in front of the high school’s eagle statue.

Bergmann said the ceremony was not ideal, but hoped it could give the students and families positive graduation memories.