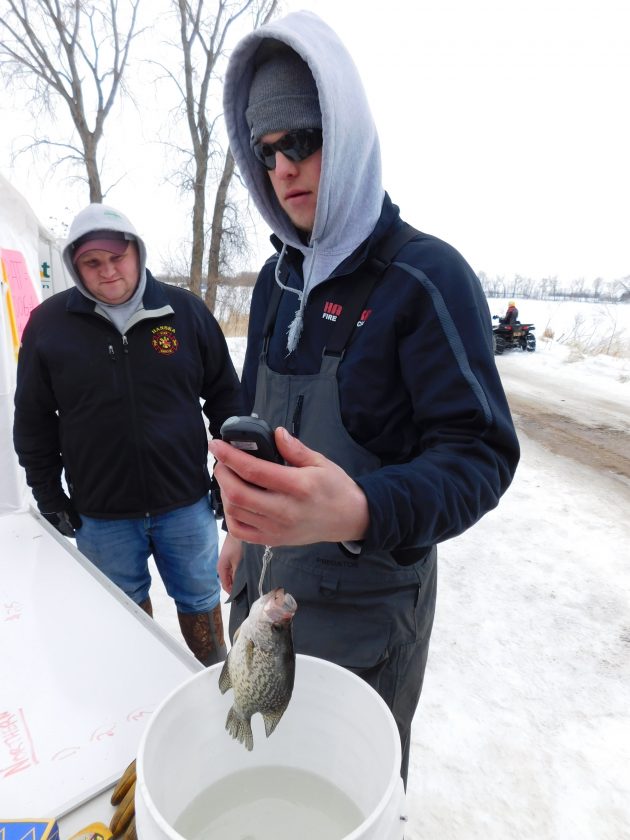 Staff photo by Clay Schuldt Jared Larson was the official fish weigher. According to his scale this crappie weights .59 lbs.

The weather was perfect for ice fishing. Assistant Hanska Fire Chief Mikale Gustafson said it was warm as it could get without the lake getting too sloppy.

The temperature held at 31 degrees throughout the tournament and low wind made for a pleasant afternoon of fishing. A solid 15 inches of ice also made it safe to drive onto the ice.

The fish at Lake Hanska were bitting. Panfish and walleye were to top fish caught. No northern were registered within the first two hours of the tournament.

Walleye were required to be at least 13 inches long to be eligible in the contest. Several fishermen reported catching walleye that were under the limit, but there were enough large walleye to fill out the top three places.

For panfish, the crappies were bitting the most. Anglers reported hitting into a few schools of crappies, but in terms of size, larger perch were caught. Two hours into the tournament Mike Buley brought in a .59 lbs perch to take the lead.

Fenske added that some crappies in the lake exceeded 13 inches and channel catfish were in the lake too.

Fishing was not the main goal of everyone on the lake. Some were out to support the Hanska Fire association and to have fun.

Small campsites were scattered across the lake. A few were registered fishermen who were content to spend time on the lake with friends.

The Hanska Fire Department Fishing Tournament brings anglers in from across the region. In addition to Hanska, anglers from New Ulm, Madelia and Sleepy Eye were present as well as ice fishers from Hutchinson and Bloomington.