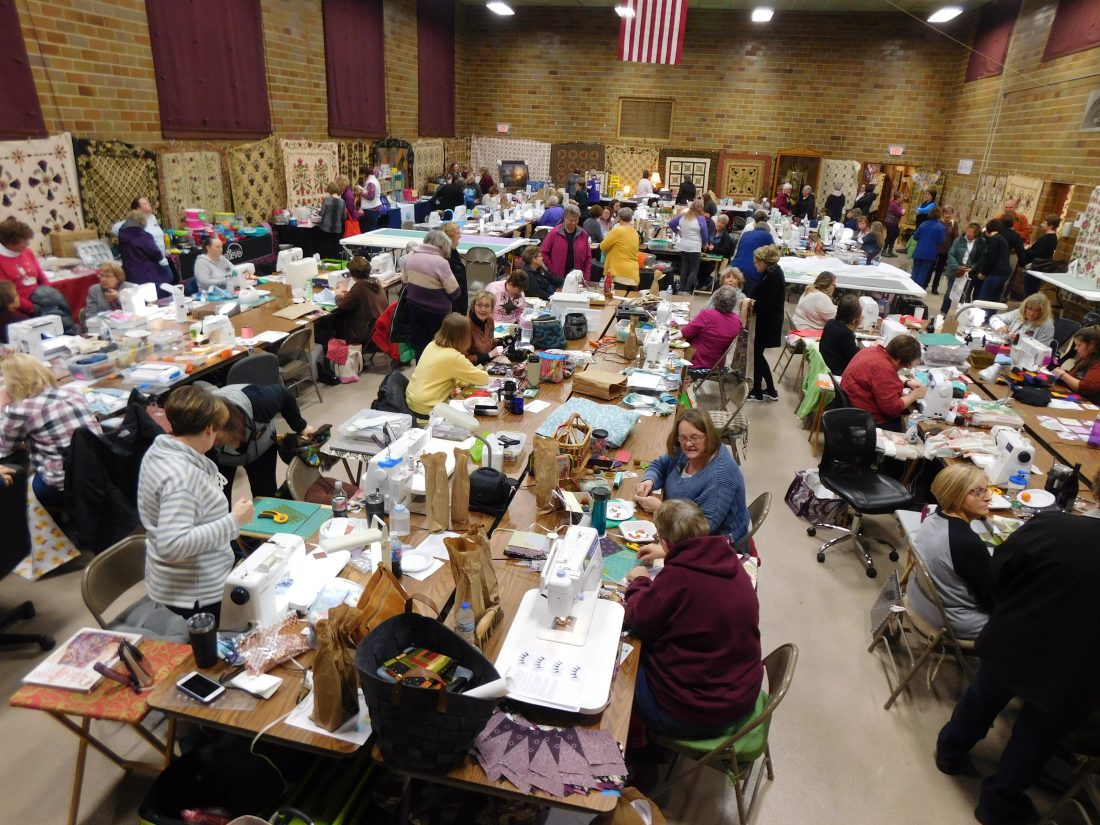 The 9th Sewing for Sight Quilt Show in St. George was well attended with 69 registered sewers and dozens of quilt admirers.

ST. GEORGE — For the ninth year in a row, quilters and quilt admirers have gathered at St. George Parish Center for the Sewing for Sight Quilt Show.

Nearly 70 sewers registered for this year’s retreat, each working on their project, but all helped to raise money for the Foundation for Saving Sight and their ongoing mission to provide sight-saving eye care to villagers of San-Lucas-Toliman,, Guatemala.

Sewing for Sight continues to expand each year. The parish center fills the space with sewing machines and cutting tables. Other rooms house a quilter’s boutique for those who need fabric, books, patterns, and notions. The quilt market offered completed projects for sale. A silent auction and giving tree helped raised additional funds and the Homespun cafe offered coffee, dessert, and refreshments for quilters on a break.

Not everyone at the retreat was a quilter. Some only came to admire the sights. More than 200 quilts were on display in the parish center.

Nancy Paris was the featured quilter this year. Around 60 of her quilts were hung along the walls. Paris is famous for her appliqueing, which she does by hand.

Paris said she began appliqueing by hand because it was a project she could complete while traveling. She and her husband would travel to teaching jobs together and it was a way to pass the time and relax.

Many of the quiltmakers in St. George agreed sewing was relaxing. It also was fun to design and finish a project.

The sewing projects range from a simple table runner made from scraps to an entire quilt made from discarded Crown Royal bags.

Several of the quilt projects will serve as gifts for friends and family. It is this spirit of giving to others that began the Sewing for Sight fundraiser.

The Foundation for Saving Sight began in 1992. It was established by Dr. Christopher Wallyn and Michael Merck, who travel annually to San Lucas, giving their medical knowledge, talents and time to deliver sight-saving eye care to the poor people in need. Many lives have been impacted by what is considered routine eye care in the United States.

Ann Wendinger traveled with Wallyn to San Lucas in 2009 and saw firsthand the impact of their eye care work. Wendinger said that after returning to the U.S. she would strive to raise funds to continue the mission. In 2012, the Sewing for Sight Show opened and it has been a success.

In eight years, sewing for sight raised $106,000 for the Foundation for Saving Sight. Dr. Wallyn gave a presentation during the show about current efforts in San Lucas. This year, he focused on the rising problem of diabetic retinopathy. This is a form of vision loss caused by diabetes complications. With the global rise of diabetes, especially in impoverished areas, this is the leading cause of blindness.

Diabetes has spiked in Guatemala recently due to dietary and exercise-related issues in the country. Wallyn said is still possible to avoid vision loss if diabetes is properly treated, but outside of the United States, it is harder to monitor.

Wallyn hopes to set up a clinic for the treatment of and education on diabetic retinopathy. He said there are health care promoters that can help spread the word.

For those who already have symptoms of diabetic retinopathy, a retinal laser can treat the condition. Currently, no rental laser is available in Guatemala. Through fundraising, the Foundation for Saving Sight hopes to bring a laser to San Lucas.

Wallyn will return to Guatemala from February 6 through February 16. Wallyn said he can perform between 35 and 40 eye-related surgeries within a week in San Lucas.