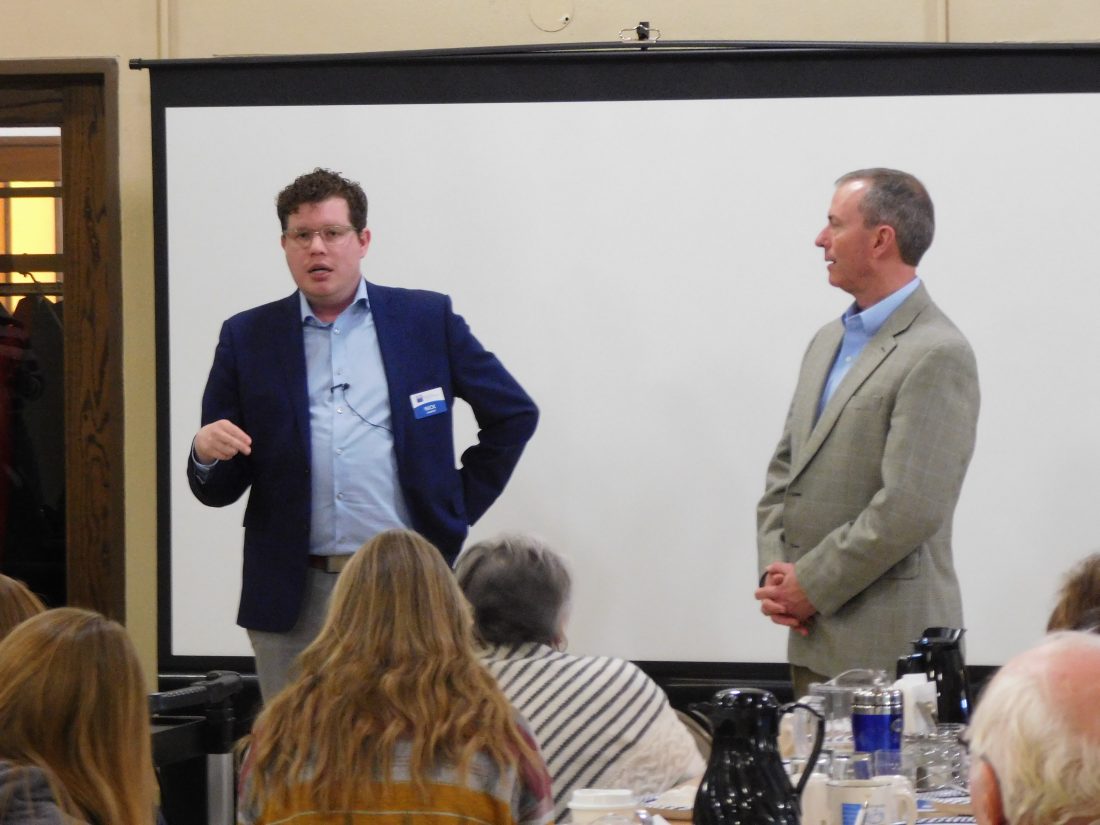 Staff photo by Clay Schuldt The League of Women Voters received an update on 2020 state legislative issues from Nick Harper (left) and information on the 2020 Census from Paul Huffman (right).

NEW ULM — A public forum on the 2020 Census and state legislative issues was held by the League of Women Voters (LWV) Saturday at the Oakwood Methodist Church.

Paul Huffman, the Census and Redistricting Coordinator for LWV in Minnesota, discussed the upcoming census and the importance of obtaining a complete count.

Huffman explained the census is the method for determining representation. The number of representatives each state has in Congress is based on the Census. State congressional and legislative districts are redrawn based on the census. Redistricting in 2021 will be based on the information gathered this year.

Huffman said some people are sometimes missed by the census. He said about a quarter of Minnesota’s population is undercounted. Undercounted groups include young children, people of color, indigenous people and low-income households.

“If we undercount by 1%, that’s 56,000 people and that is the difference between having eight congressional seats and seven congressional seats,” Huffman said. The census would ensure Minnesota is represented fairly. The other key issue is making sure redistricting is conducted fairly.

The key message was every voice should matter, every vote should count. The goal is to empower voters by maximizing representation and defend democracy.

With redistricting, the LWV wants to avoid gerrymandering. Gerrymandering is the manipulation of district boundaries to provide a political advantage for a particular party or group.

Huffman described gerrymandering as politicians picking their voters rather than voters picking their politicians. It is a method of gaming the system to win. He said it is a risk whenever all the state government branches are dominated by a single party. Fair redistricting is the best method to prevent it.

The drawing of district lines is done by individual states and every state determines its process. In Minnesota, there is little written down about what is required for redistricting. Since 1960, congressional and legislative maps have been driven by courts and the court places a strong focus on equal population but could ignore other issues.

LWV wants to propose legislation to include an independent non-partisan advisory commission to redraw the districts. The commission could ensure population equality, prevent gerrymandering, preserve communities with common interests. Another goal is to keep the process transparent to the public.

The census will ask the number of people in the household; whether the home is a house or apartment; whether it is rental, and telephone number. Each person will need to provide a name, gender, date of birth and race. Huffman clarified there is no citizenship question on the census. He also said the info is required by law to be kept confidential.

Information letters inviting people to respond to the census will go out in March. April 1 is the official census day. April 28, census workers will enter the field to interview those who have not responded. The fieldwork will continue through August. The Census can be completed online or in a paper form.

Harper said a top issue will be the state’s $1.3 billion budget surplus. He said Senate Republicans will want to return that to voters through tax breaks. House Democrats and Gov. Tim Walz have their plans for the surplus, which could include some tax breaks. By law, 10% of the surplus must be saved.

This will be a bonding year for the legislators. The state will take on debt to fiance projects, usually large capital projects like roads, bridges and grants. A super-majority is needed to pass a bonding a bill. This means the bonding bill will require bipartisan support.

The 2020 election will also affect the session. The House, the Senate and the U.S. President will be up for re-election.

“I like to say there will be a lot of campaign oriented nonsense,” Harper said. “Legislators and leadership will focus on not just how successful the bonding bill is this session, but how do we win elections in November. For better or worse that could be undermined.”

Harper expects policy issues to include health care, specifically insulin costs. He said it is an important policy, but also a good campaign issue for the elections.

Firearms will probably be discussed. But Harper suspects no new policies would pass — it will be used as an election campaign issue. He said the same about the legalization of the marijuana.

The Department of Human Service oversight and reform policy has a chance to pass. Harper suspects some reform could happen. One suggestion was to break up Human Service into a smaller department.

Legislation and policy on voting was a top concern at the forum. The LWV is hoping to remove a law limiting voter assistance at the polls. Some eligible voters are disabled or cannot read English and require assistance filling out an election ballot.

In Minnesota, a law limits a person to helping no more than three voters, which can negatively impact some communities where voters are disabled or do not read English, for example, elder Hmong voters.

Harper said on the federal level there is no limit. A voter who needs assistance can request anyone they trust to help them, except their employer or union representative.

“It could be a legislator, it could be a candidate for political office or your 13-year-old child,” Harper said.

No one wants the person assisting voters to manipulate them, but Congress decided the voters are smart enough to know who should help them.

Currently, laws similar to Minnesota’s that limit who can assist, have been challenged in other states. The courts have sided with the federal guideline, which means Minnesota could face a lawsuit.

In the last session, a law was proposed to remove the three-person limit, but it did not pass. It will be brought back to the legislators this year.

LWV is also seeking the restoration of voting rights for individuals with a felony conviction who are not incarcerated. Minnesota has an average to low incarceration rate but has a high probation/supervised release. The time in which a person is on probation is also high in Minnesota.

Harper said in Greater Minnesota some people are on probation for 20 years, meaning a person on probation since age 18 would not be allowed to vote until they are 38.

Harper was not optimistic that restore-the-vote efforts would pass. He said there was bipartisan support, but Senate leadership has not prioritized it.

LWV wants to put pressure on legislators in hopes to restore the vote in 2021.

Legislative transparency was another top LWV issue. Over the last few years, the Minnesota legislators have struggled to complete session work before the deadline. This leads to last-minute negotiations behind doors with leadership. The rank and file legislators, lobbyists and reporters do not necessarily know what is happening with bills.

“If you have people who are paid to be there on a full-time basis and have no idea what is happening, how can you expect your constituents to know what is going on?” Harper said.

The 2020 Minnesota Legislative session will be shorter, starting Tuesday, February 11, and ending the third week in May.