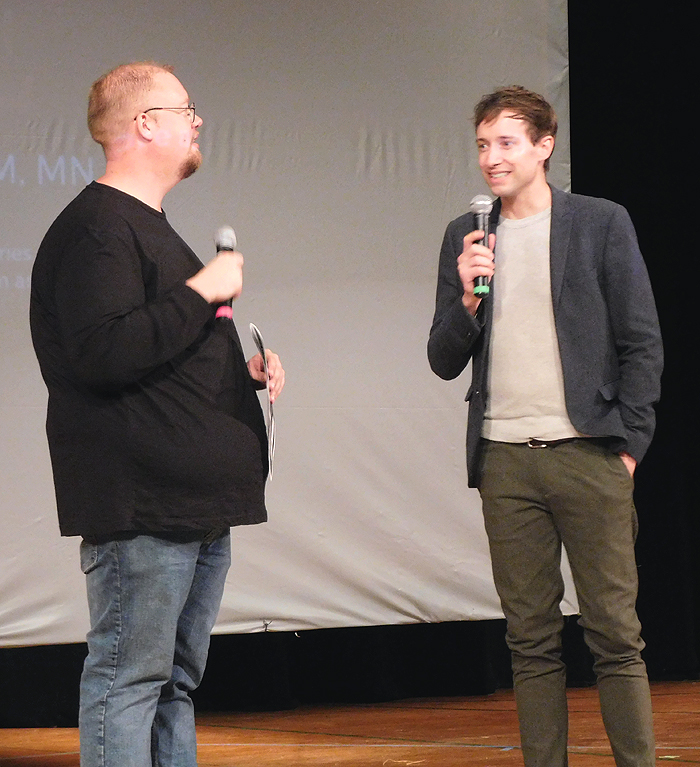 NEW ULM — The first night of the New Ulm Film Festival kicked off with the screenings of five short films from actor and New Ulm native David Rysdahl.

Rysdahl is the son of Gigi and Dr. Scott Rysdahl. He has accrued 50 acting credits to his resume.

The opening night of the film festival was dedicated to Rysdahl. His short films “Stay Awake,” “Humpty,” “The Ghost of Hank Williams,” “Black Swell” and “Houseplants.”

In between the short film, Rysdahl answered questions about acting and the filmmaking process. At the end of the night, he took questions from the audience.

Rysdahl said he deciding to become a professional actor after performing in The Great River Shakespeare Festival in Winona. On the suggestion of fellow cast members, he moved out to New York. For three years he appeared in off-Broadway production before transitioning to film.

Rysdahl also writes. He wrote the script for “Black Swell” and has written a feature film he hopes to film in New Ulm.

Taking questions from the audience, Rysdahl was asked why there was a rise in the popularity of short films.

“The internet has created a new life for short films,” he said. It is easy to create a short film and upload it to the internet to reach a large audience. He said the short film also works like a calling card for filmmakers. People can see what actors, directors, and producers can accomplish with a few minutes.

Rysdahl was able to answer general questions about the filmmaking process, including creating a character, hunting down shooting locations and the differences between shooting on film versus digital.

Rysdahl has screened his films at other festivals but said he was a bit more nervous to be screening his work for a hometown audience.

“I was a bit nervous but I felt the love,” he said.

Rysdahl has plans to film a movie he wrote in New Ulm. The film is a dark comedy about a father and daughter faking a cancer diagnosis. Originally producers were trying to encourage Rysdahl to film in Canada for tax discount, but he insisted on filming in his hometown for the New Ulm feel.

Rysdahl recently wrapped filming on a sci-fi film called “Nine Days” which is scheduled to be released next year.