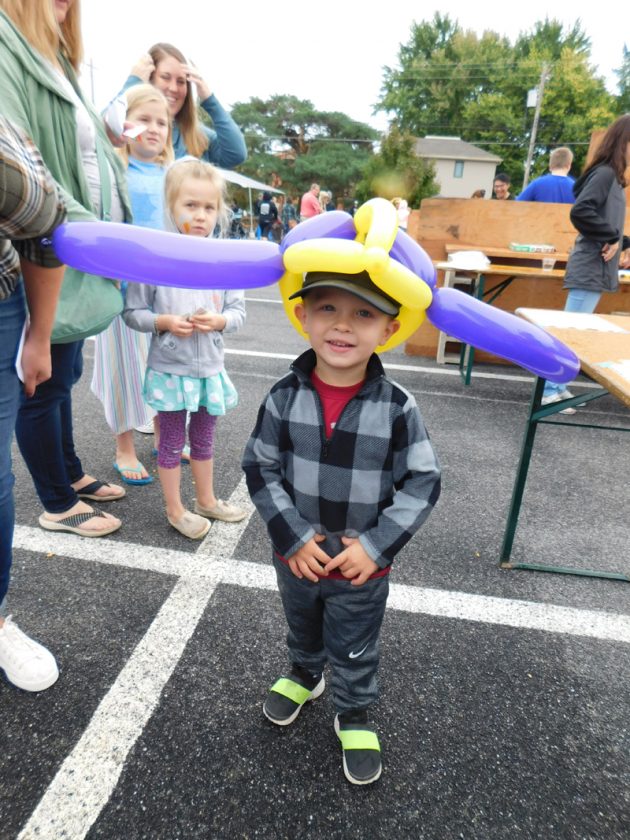 Staff photo by Clay Schuldt Hudson Portner proudly wears a Vikings balloon hat made by Clair Fischer. The balloon hats were one of many fun items at St. Mary’s Fall Festival.

Msgr. Douglas Grams said the goal of the festival is to have something for every age group.

Grams said this year marked changes in the lunch menu. During past years the organizers served ham and meatballs, but this year they served ribs and George’s-inspired potatoes. The owner of George’s Fine Steaks & Spirits showed the kitchen volunteers how to make the restaurant’s classic potatoes.

The new menu proved a big hit. The dining room at St. Mary’s was filled, and takeout orders were also going well.

Grams said the organizers were prepared to feed a lot with 900 lbs of ribs on hand.

The Fall Festival was one of several weekend events hosted by Catholic groups. On Saturday, the New Ulm Area Catholic Schools (NUACS) celebrated the 100th anniversary of Cathedral High School. Tours of the school facilities were offered to the public. Also, NUACS inducted baseball coach Bob Weier and softball coach Bob Mertz into the Hall of Fame as Distinguished Athletics Award winners.

The church will hold another anniversary celebration in October, honoring the 150th year of Holy Trinity.