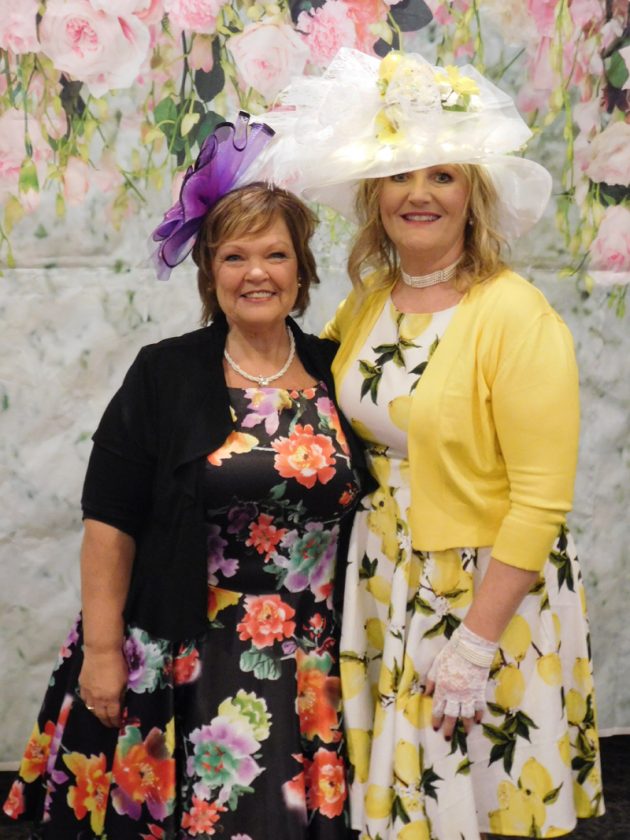 The event was called Tea for Ta-Ta’s, supporting all cancer. Nearly 200 women and a few men attended the party in their best Sunday dresses and most flamboyant hats. All the money raised went to the Virginia Piper Cancer Institution.

“All the money is staying locally,” event organizer Kristine Rueckert said. “Our goal is to raise money for three wall-mounted blood pressure cuffs. We have raised over $10,000.”

The idea to host a tea party event came from co-organizer Sandy Reinke. Reinke said she would host parties in her backyard for friends. Her friends would come over with food, but Reinke had a better idea.

“I told them not to bring food, but to bring donations,” she said. “Word got around about these parties and we decided to take it to another level.”

The support for the event was higher than expected. The event had featured several sponsors and sold out of tickets. The organizers ultimately decided to raise the number of tickets to meet the demand.

Reinke said the goal was for three blood pressure cuffs, enough money was raised for four. She said if NUMC does not need a fourth cuff, but there are other things on their wishlist to use the surplus.

The tea party included guest speakers. Oncologist Dr. Anas Khanfar spoke on methods of preventing cancer. His three points were to eat healthy, control weight and get 20 minutes of physical activity a day. He advised patients to stop smoking, as a third of cancer deaths are linked to smoking.

“I cannot overemphasize the importance of screening,” he said. “It can save lives.”

The program closed with a speech from cancer survivor Beth Kretsch. Kretsch spoke of her years of cancer treatment. Her story began with a lung cancer diagnosis. Her left lung was removed, but cancer spread to her shoulder.

Today she receives injections once a month at the Mayo Clinic in Rochester. Kretsch estimated she has made 150 trips to the Mayo Clinic to treat her cancer. She was thankful for friends and family who came with her on these trips.

Through the experience, Kretsch has come to believe faith is necessary to fight cancer. She said a person needs faith in their doctors, nurses, and God. Kretsch encouraged other survivors to share their stories.