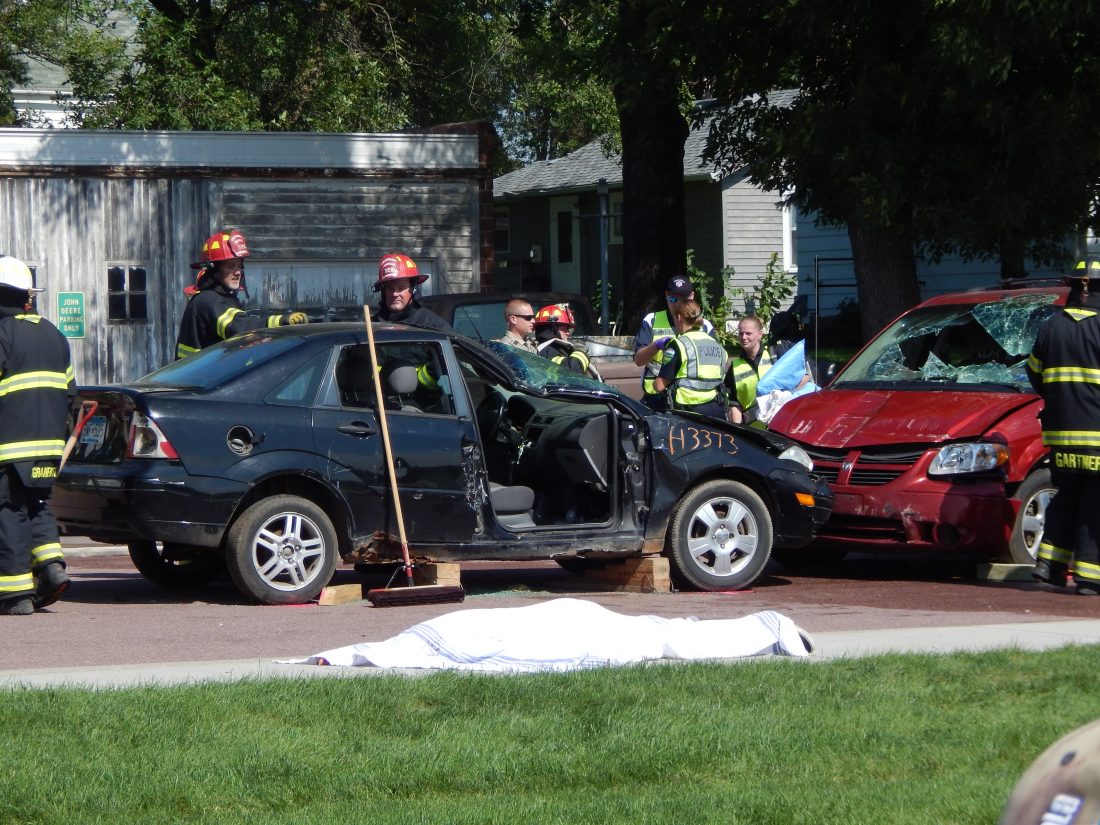 Staff photo by Fritz Busch A pretend “victim” covered with a blanket can be seen in front of a mock two-vehicle crash at the Springfield High School Arrive Alive 2019 distracted driving event Wednesday. Springfield Police, Firefighters and a Brown County Sheriff’s Deputy are also on scene.

A girl who “died” in the mock crash was covered with a white blanket before a hearse arrived. She was loaded into the back of the hearse and driven away.

The exercise was intended to send a hard-hitting reminder to students of the dangers and consequences of unsafe driving behavior — such as driving while distracted, driving at unsafe speeds and not buckling up — during Springfield’s Homecoming Week.

Minnesota State Patrol Crash Reconstruction Specialist Melanie Cook said she can determine how fast vehicles were moving before they crash.

“Vehicle crashes are the leading cause of unintentional death for people from birth to age 24,” Cook said. “The crashes involve distracted driving, speeding, failing to buckle up and other risk-taking behavior. The faster you drive, the less time you have to react to a hazard. Reduce speed in inclement weather. At 55 mph, you go 300 feet, the length of a football field in five seconds.”

Cook said she was guilty of distracted driving herself as a teenager. She was tuning in to a radio station while driving and she drove off the road and into a residential yard.

“It’s illegal to use a cell phone when driving. It doesn’t matter if you have a hands-free device. You can still cause a crash,” Cook said. “Alcohol is often a factor. If you’re under age 21, not a drop of alcohol (in your body) is legal when you drive.”

Hadley, who experienced the unexpected loss of two of her children when they were 20 and 24 years old, said she hoped students would pay attention to the school program.

“It’s about staying alive and surviving the hardships of the world like losing loved ones,” Hadley said. “Through tragedy, I found my faith. It’s very normal to have troubles. You should expect them to happen. They can be purposeful. Be there to help others. Life can change in an instant.”

Hadley told of how her daughter Kaylie died of a sudden unexpected seizure after she was diagnosed with epilepsy.

“My world was rocked to bits when she died. I was full of panic, anxiety, pain and regret,” Hadley said. “There will be times in your life when you feel that way. I was super blessed with a dad who told me if I ever felt something wasn’t right, to ask for help.”

Hadley said a female friend from Springfield came to her door and said God told her to come and pray with her.

“She told me the most healing prayer. I asked the Lord to use me like he used my friend to help me,” Hadley said. “Ask for help, get it and start counting your blessings.”

Hadley talked about the unusually warm winter day that then turned very cold and windy, several years ago. It was the day her son Tyler and three of his good friends died in a two-vehicle crash on U.S. Highway 14 just west of Sleepy Eye.

“It ripped my heart apart,” Hadley said. “It was so icy on that highway, a first responder fell on the icy highway, breaking a tooth.”

She told of how she prayed with surviving family and friends after the crash.

Deb said she and her sister work with for hospice services, helping people that are dying.

“When something bad happens, you have three choices. You can let it define you, let it destroy you or let it strengthen you,” Hadley said.

Before Hadley and her husband moved from Sleepy Eye to Alexandria a couple years ago, they hosted Kaylie & Tyler’s Faith Jam that included 3 on 3 basketball games in honor of Tyler and a large 5k color run in honor of Kaylie around Sleepy Eye Lake.

She invited people with questions or in need of help to call or message her on Facebook at www.facebook.com/KT-Humble-Hearts-Foundation-Deb