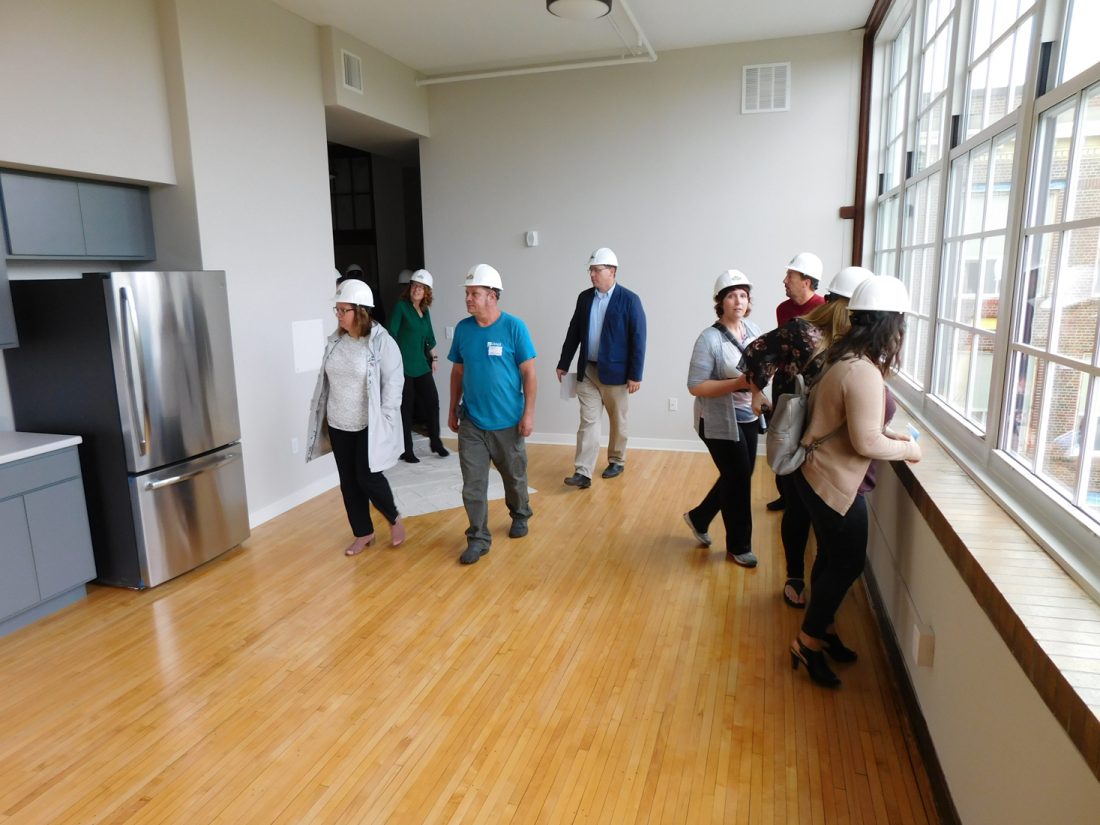 Staff photo by Clay Schuldt Participants in a hard hat tour of the Emerson Union apartment project views a completed two-bedroom apartment unit. The unit featured a kitchen with large windows on the east facing wall.

NEW ULM — Converting the old New Ulm High School into the new Emerson Union apartments is still ongoing, but a special hard hat tour of the facility was held Thursday.

Members of the Flannery Construction team led tour groups through completed sections of the Emmerson Union building. The former school is being remodeled to include 49 apartment units, two of which are complete.

Mark Hennessey with Flannery Construction described the project as an adaptive reuse. The remodeling added new apartment elements but incorporated old elements from the school where possible.

The transoms above former classroom doors have been retained. The built-in chalkboards and cupboard spaces have also been retained in the units.

The windows in the apartment units were also replaced. Several people on the tour commented at the large size of the windows, which allowed a great amount of natural lighting.

Emmerson Union will have one-bedroom, two-bedroom, and three-bedroom units when completed. Each unit is based on a former classroom and no two units have the same floorplan.

Architect Mary Barnett said the greatest challenge for this project was balancing the necessary apartment elements with maintaining the historic elements. The greatest benefit was the support of the community, and it would be a benefit to the public.

“Knowing everyone’s heart was in this project made it easy work on,” Barnett said.

This project was made possible through a partnership between the city of New Ulm, community partners and nonprofit developer Community Housing Development Corporation (CHDC).

CHDC has worked on nearly 4,000 units in Minnesota. The bulk of the nonprofit’s work has been done in the Twin Cities, but the company has finished a few in greater Minnesota.

CHDC purchased the old high school, excluding the State Street Theater portion, in 2017. The apartments will be leased to individuals and families earning 50 to 60 percent of the area median income annually.

City Manager Chris Dalton was impressed with the design of the new units. He said it showed it was possible to build something nice for those who could not otherwise afford it.

CHDC president Elizabeth Flannery said the project was coming along relatively fast for an affordable housing project. She credited the city and community partners for making the case to the state to move forward with the project.

“We have never worked on a housing application with more community support,” Flannery said.

Mayor Robert Beussman was excited about the project. He said the apartment units were a wonderful addition to the city. Beussman was also pleased with the name “Emerson Union” which is a combination of two former New Ulm school names.

The idea to combine the names came from CHDC senior vice president Heidi Rathmann. Rathmann was aware of the former school’s history because she was a student at the former high school.

Rathmann said during the construction process she had a habit of referring to the rooms by the teacher who taught in the room during her school days.

Rathmann said the decision to convert the old school into apartments came in response to the need for housing in New Ulm.

“The building is in great condition,” Rathmann said. The size of the former school made it workable for an adaptive project.

Former New Ulm High School art and math teacher John Ingebritson toured the remodeled building. He remembered teaching in the building and telling students buildings in the United States are not built for permanency. With the adapted reuse of the school, he said he was happy to see the historic building was not going anywhere.

Emerson Union is expected to be completed in December 2019. The first move-ins are anticipated for January 2020.