Attorney speaks of dangers of sexting 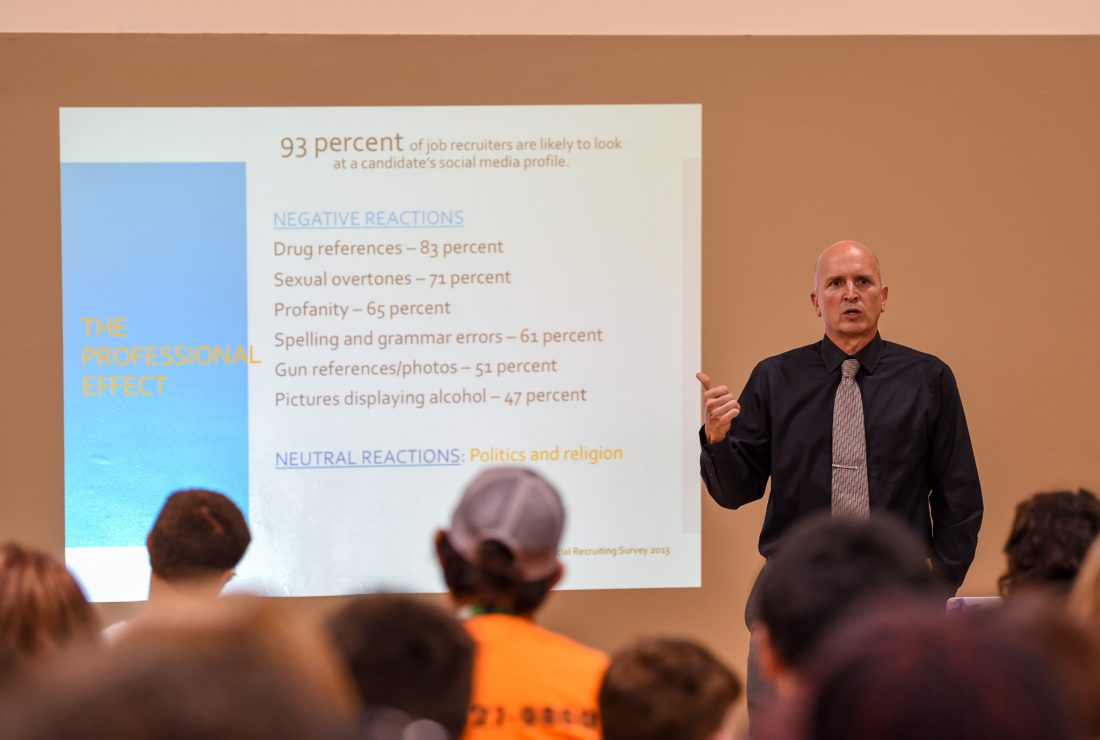 Staff photo by Gage Cureton Brown County Attorney Chuck Hanson speaks to River Bend Education District students about the dangers of engaging in sexting and sending nude photos Tuesday at the school. Hanson said sending or possessing nude photos of persons under the age of 18 may lead to felony charges. Hanson also spoke of social media and internet responsibility.

NEW ULM — Brown County Attorney Chuck Hanson warned students at River Bend Education District of the dangers of sexting and sending nude photos during a presentation at the school Tuesday.

Hanson has done similar presentations in Sleepy Eye and at Minnesota Valley Lutheran High School that are meant to engage students and educators, and warn of the dangers of sexting.

He said he was invited to speak at River Bend after the school experienced issues with students allegedly engaging in sexting.

“If they keep doing it, it can get more serious,” Hanson said. “As a juvenile you get two petty misdemeanors and then after that everything is a delinquency.”

According to Hanson, sexting occurs when a person uses a cell phone or another device to take, send, possess or request sexually explicit photos or messages.

“If you’re sending a message to someone that is graphic in nature, even if there are no pictures involved, that is a crime,” Hanson said.

Hanson said asking for nude photos (solicitation of child pornography), taking a picture and sending it (creation and dissemination) and possession of lewd photos are all felonies under law and charges could lead to prison time if an individual is 18-years-old.

Hanson said sexting is not only a growing problem in Brown County, but also a national issue afflicting individuals and communities.

“I know from experiences it’s getting more common,” Hanson said.

According to a study released by JAMA Pediatrics in 2018, sexting has become more commonplace among youth with about one in four (or 27.4%) of those between the ages of 12 and 17 having received a sext and about one in seven (14.8%) having sent one.

The numbers compiled by JAMA are significantly higher than those from a 2009 Pew Research Center study that revealed that 4% and 15% of 12 to 17-year-olds had sent or received sexts.

Hanson told students that charges, and the consequences for engaging in sexting, grow with each additional charge. He said a first time charge for dissemination can mean seven years behind bars and a $10,000 fine. A second time offense could mean a 15-year felony with a fine of $20,000.

Sending an unwarranted nude photo may also mean a 10-year registration as a sex offender.

Hanson also spoke of social media responsibility and the importance of remaining vigilant of what is posted on personal accounts or sent to others. He said anything posted online or sent over a device connected to the internet is online permanently and cannot be removed.

Hanson said he’s witnessed child pornography cases involving individuals sending photos over Snapchat, a social messaging app where pictures and messages that are sent are only available for a short time before they become inaccessible to their recipients.

He said during these types of cases the county attorney office can subpoena Snapchat to request access to photos no longer accessible to recipients, and they can be used as evidence in a case.

“It’s not gone, it’s never gone,” he said. “Anything digital is there and we can find it.”

Using a federal database, Hanson said the attorney’s office has also found photos on the internet of children living in New Ulm in places as far away as the Philippines.

“That’s I think why we’re doing more of this… A lot of parents don’t realize how prevalent it is and how much their kids are involved in it,” Hanson said.