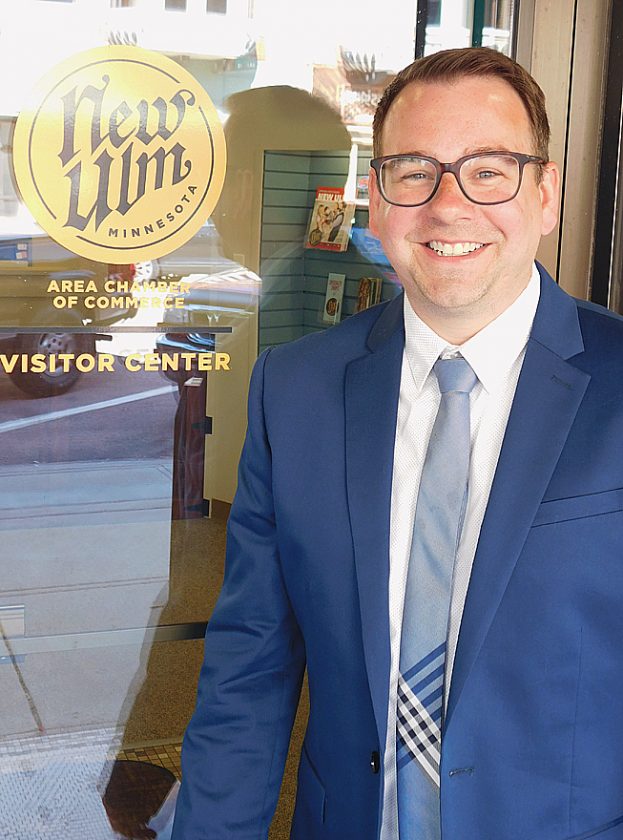 NEW ULM — The New Ulm Area Chamber of Commerce has a new president. This week Michael Looft arrived to fill the vacant position at the Chamber.

The Chamber president position has been vacant since former president Audra Shaneman resigned in April. She is currently the New Ulm Assistant City Manager.

“I am really excited,” Looft said about his new position. “It is fun to be involved in the community and promoting tourism is important.”

Looft has a degree in political science administration and a sociology degree. He previously worked for Walmart, managing stores all over south-central Minnesota, including Waseca, Redwood Falls, and Fairmont. He worked the last three years in Mankato. In April, Looft made the hard decision to change careers.

“I almost gave up looking, but then I found the New Ulm Chamber,” he said.

Looft officially started work Tuesday, Sept. 3 but he came into the office a week early to introduce himself to people in the office and business community.

As chamber president, Looft believes his task is to collaborate with business in the community, including manufacturing to attract new employers and maintain those already in the community.

Another important aspect is advertising. Loof said advertising brings people into the community, but it also gets them to stay.

One of the challenges facing the Chamber president is the growing number of empty storefronts downtown.

“It is complicated,” Looft said. “It takes a lot of risks to start a small business even with a good economy.”

He warned against looking for a large retail giant taking over the empty spaces.

“Big-box stores were my business for 15 years, but they don’t build those stores anymore,” Looft said. “There is not going to be another Herbager’s.”

He felt New Ulm did have a great selection of small business and is optimistic about New Ulm’s potential. He said, “New Ulm is already strategically placed. It known for being clean, safe and the new high school is an advantage.”

Another resource is his predecessor, Audra Shaneman. Shaneman is now New Ulm’s Assistant City Manager with an emphasis on economic development.

Looft said he has already reached out to Shaneman who laid a foundation for his position. He is confident their collaboration will be another resource point.

“I am ready to meet the people of New Ulm,” Looft said. “I look forward to introducing myself personally to the business leadership in New Ulm.”