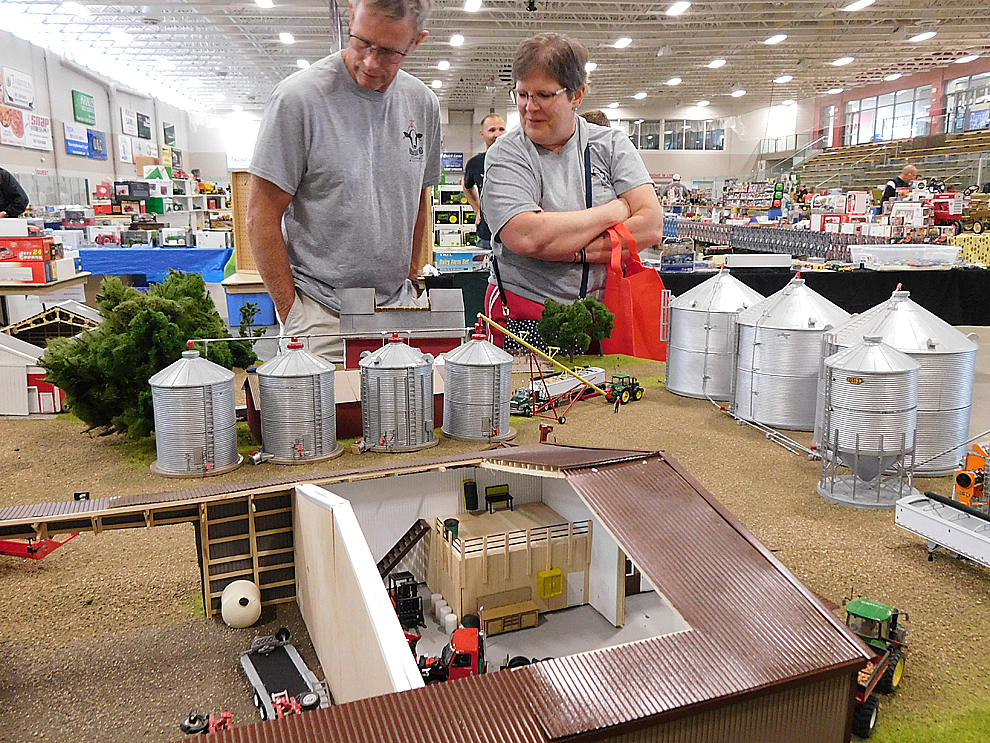 Staff photo by Clay Schuldt The New Ulm Toy Show included several farm dioramas. The displays were part of a miniature competition. Visitors to the show could vote on which model was the best. The winner will be announced Sunday.

The event is held every Labor Day weekend and is dedicated to farm toy enthusiasts.

The New Ulm toy show draws vendors and crowds from all across the Midwest. Over 250 people visited the Toy Show within the first two hours.

Wendy Mealman and her husband Jim have organized the show for the last four years, but they have been attending it for even longer.

Mealman said vendor fairs like this are common in Minnesota. They have attended 26 shows this year. Collecting farming miniatures is a popular past time in the midwest.

Mealman said her husband has collected the toys since he was a kid. One day they notice he had several duplicates of toys and they decided to sell off the extras a show. The couple found out they enjoy going to the shows and have been attending them ever since.

The New Ulm Toy Show was first started by Brad Zender. He organized the show for 30 years before the Mealmans took charge. Zender was impressed with the way the Toy Show had grown. He had long attended toy shows and 34 years ago, though it could work in New Ulm.

“I didn’t expect it to last five years,” Zender said, “now I don’t see it ever dying.”

Zender is one of the larger vendors at the show. He sells a variety of tractor models in several brands including, John Deere, Case, Allis Chalmers, and many others.

“I am always looking for something no one else has,” he said. “I try not to hold to one model or one type of toy.”

Each customer is unique and is trying to find a tractor model specific to them.

Farm toys are the focus of the show, but other types of toys are on display. Rod Bunker of Medford, MN was selling a variety of semi toys and a few airplanes. He said he began collecting toy trucks and he became hooked.

Other venders do not sell miniatures vehicles, but rather than accessories to miniature vehicles. Brad Duenow specializes in making miniatures hay bales.

All of his mini-hay bales are manufactured by hand in his basement. The little hay bales add a touch of realism to any model farm.

Each year the Toy Show holds a special miniature contest. Contestants compete to create best miniature display and visitors to the show get to vote on the best miniature model. Most of the displays feature farm-themed dioramas with extensive details. Farm sites include houses with fully shingled roofs, connected power lines and fabric material designed to mimic crops.

Cash prizes are awarded to first, second and third. Mealman said this year the fourth award for grand champion was added. This award will be given by a judge with expertise in miniatures. The awards will be given out Sunday.

The New Ulm Toy Show will continue from 10 a.m. 3 p.m. Sunday at the Civic Center.