Bolduan honored for dedication to river 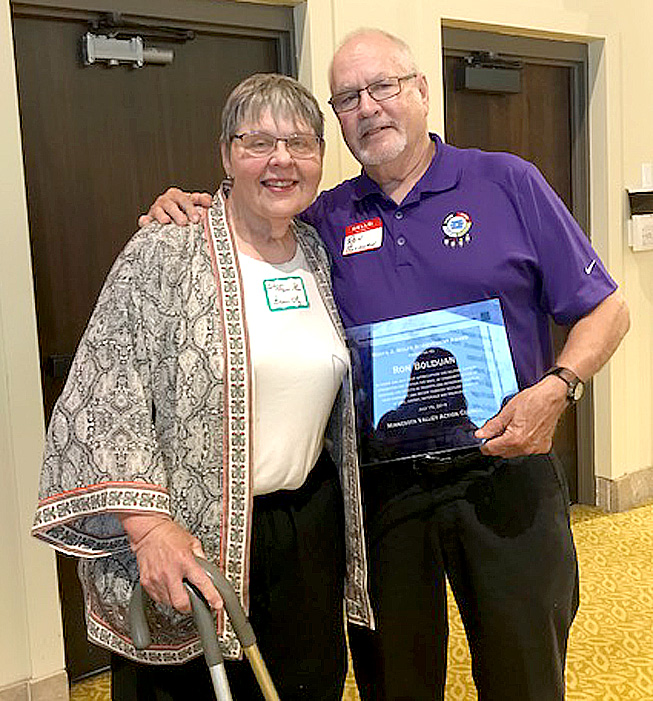 MANKATO — Ron Bolduan of New Ulm was honored for his efforts and dedication to the Minnesota River and teaching kids about nature at the Minnesota Valley Action Council’s (MVAC) 53rd Annual Meeting and Awards Dinner Monday.

Bolduan, curator of the Riverside History and Nature Learning Center in New Ulm, received the 2019 Roger J. Wolfe Achievement Award at the dinner.

The Roger J. Wolfe Achievement Award was established in memory of Roger J. Wolfe who served on the MVAC Board of Directors for 22 years. During this time, Roger contributed his time and energy towards improving the lives of others. This honor goes to someone who symbolizes the ideals that Roger represented.

Bolduan has had a long love affair with nature, especially the natural environment around him in the Minnesota and Cottonwood River valleys. Using his talents in photography, he has introduced thousands of children and adults to the wonders of the ecosystem through school programs and presentations.

In 1995 he produced a slide show for the Coalition for a Clean Minnesota River (CCMR) banquet, and that led to his presentation to his granddaughter’s 3rd grade class in Walnut Grove.

When the former Franklin School in Riverside Park was converted to the Riverside History and Nature Learning Center in 2010, Bolduan brought his large collection of nature artifacts which is now housed there.

He also helped organize a youth program called River Rangers for children in the area.

All of his presentations are given for free.

Bolduan was quoted by one of his nominators, Brenda Longworth: “My goal is to make people more aware of the Minnesota River, which is right in the heart of Minnesota. Once they appreciate what they have, they are going to work hard to maintain it and preserve it,”

At the nbanquet, MVAC also presented Achiever Awards to peopl from the area. Among those is Stephen Johnson of Brown County,

An Achiever is a service recipient honored for demonstrating success by overcoming multiple barriers, making vast improvements, and having significant achievements. Johnson was first connected with MVAC in 2018 when he faced layoff from Elkay in New Ulm, and decided to seek additional education through the MVAC Dislocated Worker Program.

He began taking classes at South Centeral College and is seeking his AAS in Civil Engineering Technology.