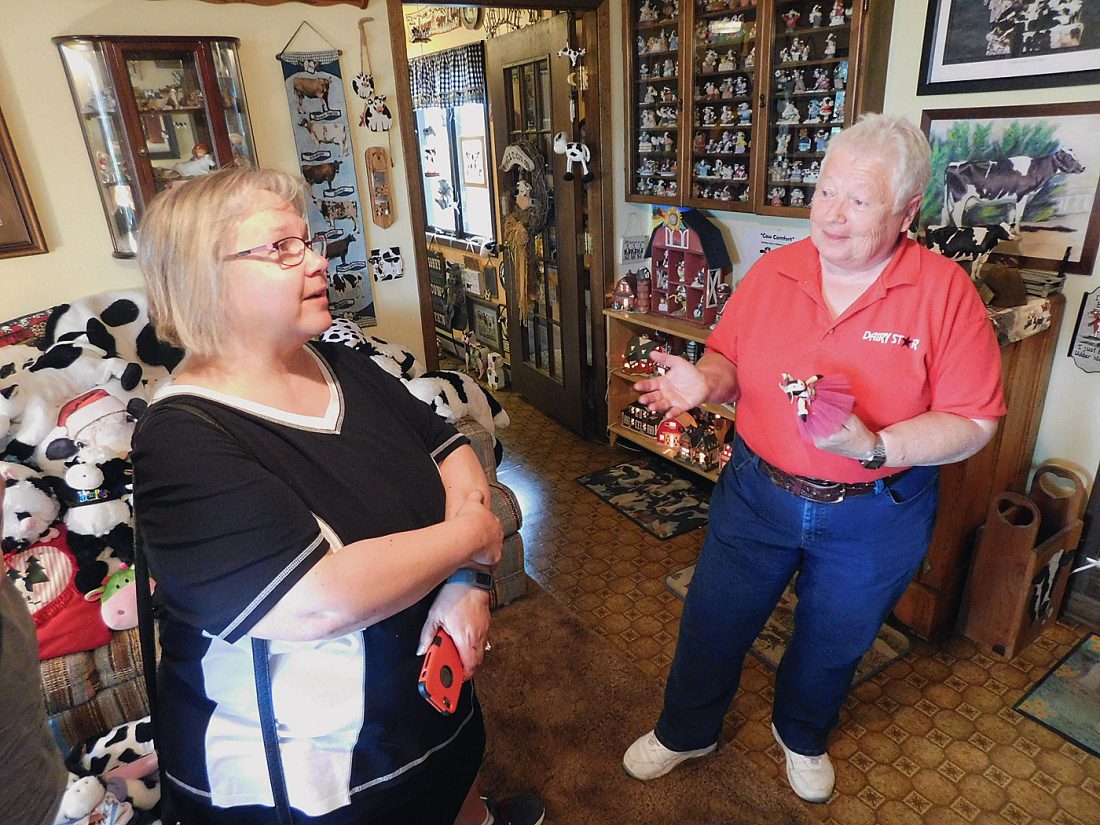 Staff photo by Clay Schuldt Ruth Klossner (right) visits with her friend Rachel Larson from Shoreview, MN. Larson visited the Mooseum for the first time Saturday and gifted Klossner a cow in a pink tutu, which brought the record breaking collection to 18,715 cow-themed items.

BERNADOTTE — A herd of tourists visited the village of Bernadotte Saturday to tour the Mooseum.

The Mooseum is the home of Ruth Klossner, who has the distinction of holding the Guinness World Record Collection of cow-related items.

Each year, Klossner has held an open house event for visitors to explore the Mooseum. Typically the open house is held in December, but Klossner decided this year to hold it in a warmer month. Originally she wanted to hold the open house in the spring but weather forced her to wait until summer.

Klossner scheduled her open house the same day as the annual Swede Fest held at the Bernadotte Lutheran Church across the street. Visitors to the Swede Fest could stop into the Mooseum while they waited for festivities to start.

The reschedule paid off as many new visitors came to the Mooseum. Rachel Larson, a long time friend of Klossner’s, visited from Shoreview. Larson said this was her first visit to the Mooseum. She intended to visit during past open house event, but the weather and holiday season prevented her drive down to the St. Paul area.

Larson is also a fan of cows and once had an impressive collection herself, but needed to part with the collection. Rather than give them to a secondhand store she gave the cow items to Klossner.

“I wanted to make sure they were in good hands,” Larson said, “The cows meant a lot to me over the years.”

Larson gave Klossner another cow decoration on this visit. She was not the only one to bring a gift cow.

At the start of the day Klossner had 18,710 unique cow-themed items. Within the first hour visitors gifted with new items raising the total to 18,715.

Klossner said she accepts any unique cow-themed items. She tries to avoid adding duplicates to her collection.

One visitor brought in two cow themed creamer pictures that were added to the collection. The visitor also brought a toy cow, but Klossner already had a copy.

As the cow collection grows, Klossner has photographed and documented each addition.

In order to receive the Guinness World Record, Klossner needed to prove she had enough items. The previous record holder had around 3,000 cow items. Klossner had significantly more but proving that was difficult.

In order to properly document the items and individual would need to count each item.

Tom McCarthy, a retired District Court Judge for Gaylord, volunteered to count her cow memorabilia. With the help of his wife Patty, McCarthy was able to finish the task in two days.

As the official record holder for most cow-related items, Klossner’s home is a popular place to visit. People from all over the country and even some from outside the United States have dropped in to see the cow collection.

Everyone has a favorite cow item on display. Klossner said the cow given to her from actress Tippi Hedren is popular. A battery operated laughing cow toy also brings lots of smiles.

Mooseum docent Jacob Vogel and Alex Schroeder said the collection of cow butter pourers, located next to the cow salt and pepper shakers, were pretty popular.

Tours of the Mooseum are available by appointment. Klossner can be reached by email at cowladyruth@gmail.com or by phone at (507) 240-0048