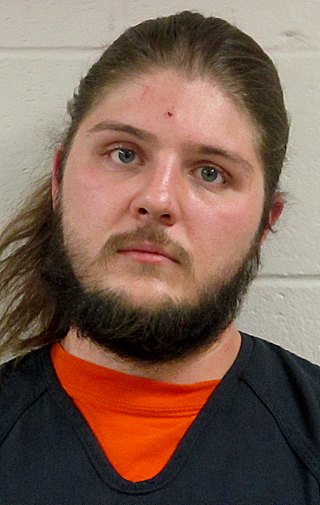 Matthew A. Penkert, 200 E. 3rd St., Hanska, allegedly got into a fight Tuesday, May 22 with a woman with whom he had a domestic relationship, put his hands around her neck, choked her and restrained her up against a wall, according to court documents.

Penkert’s bail was set at $10,000 without conditions. Conditional bail including no alcohol/controlled substance use or possession, no contact with victim(s) was set at $5,000.

Brown County Sheriff’s Deputy Jacob Stueber interviewed Penkert and the alleged victim who said they got into a fight and that Penkert choked her. Stueber photographed red marks on the right side of the victim’s neck. She said she was on her way out when he hit her in the face, causing the inside of her lip to bleed.

The woman told Stueber her throat hurt, that she could not breathe and “thought I was going to die.”

Penkert also had visible injuries but said he didn’t wish to press charges against the victim. Both people said they were in a domestic relationship.

Penkert was arrested, waived his Miranda rights and admitted to Brown County Sheriff’s Office Investigator Jeremy Reed that he had some “pipes and stuff” in the residence.