Kimmel, Torkelson to face off in House 16B forum 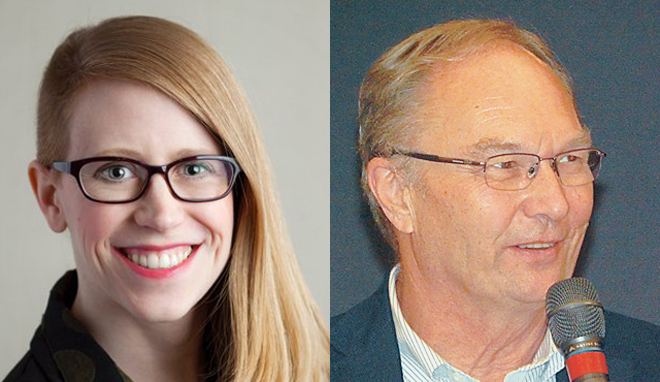 NEW ULM — New Ulm residents will get a side-by-side look at the two candidates in the Minnesota House 16B race tonight at the New Ulm League of Women Voters candidate forum.

The forum is at 7 p.m. at the New Ulm City Hall council chambers. It will be broadcast on KNUJ and on NUCAT.

Torkelson, seeking his sixth term, has been in office long enough to earn some weighty committee appointments, including chairman of the House Transportation Finance Committee. In the 2015 session, he was chair of the House Capital Investment Committee, which oversaw the state bonding bills.

As such, he has been part of some contentious debates and frustrating end-of-session legislating as the Republican-controlled Legislature knocked heads with Gov. Mark Dayton and his veto pen.

Kimmel said she has seen the negativity and toxicity of current politics and thinks she can provide a fresh perspective.

A New Ulm native and sixth-generation Brown County resident, Kimmel earned a Bachelor of Applied Science degree in Psychology at the University of Minnesota-Duluth, and went on to earn a Master of Science degree in Education and Community Counseling at the University of Wisconsin-Superior. For the past eight years she has been working as a counselor, and is currently a licensed Marriage and Family Therapist at Five Rivers Mental Health Clinic in Mankato.

“I believe it’s time for a fresh perspective,” Kimmel said. “I listen to people for a living and help them find ways to find solutions.”

The 2016 election, she said, was “really toxic for a lot of people — the lack of working together, the lack of being open to other perspectives, people stopped listening and just started arguing and disagreeing. I just thought, I have the skills, I work with families and couples, and we work to resolve their conflicts all the time. I want to use my skills at finding common ground and finding solutions for people in the Legislature. I just think it’s time.”

“I remember when the Republicans controlled the Legislature and the governor’s office, I thought it would be so much easier, but it was still hard to find agreement. There are so many diverse interests in the Legislature. That’s part of politics.”

Torkelson and Kimmel should show some similarities in opinion at tonight’s forum. Both would like to see a quick tax conformity bill pass to bring Minnesota’s tax law in line with the 2017 federal tax bill. Torkelson said that with a large number of new legislators coming in this year, it may take a while for them to feel they are getting their input.

Kimmel said that on taxes she would like to focus on keeping property taxes down, especially for farmers who are facing challenges from low prices, poor crops and a trade war that has China placing tariffs on their crops. She wants to see if farm property can be taxed based on production capacity, rather than the value of the land. She also wants to restore Local Government Aid to previous levels to help cities keep property taxes down.

Both would like to see more funding for transportation. Torkelson said a gas tax increase is a politically charged issue. He has proposed a constitutional amendment to create a sales tax on auto-related sales, like auto parts, to be dedicated to transportation.

On K-12 education, Torkelson wants to see fair funding levels, especially for rural school districts. Kimmel said schools have been underfunded for a long time, which is evident by the lack of vocational classes that have been cut over the years. Now that the need for skilled workers is growing, schools need to add those classes back. Torkelson also supports promoting vocational education in schools.

These and other issues will be sure to be on the table at tonight’s LWV forum.

Written questions will be accepted throughout the forum. By League of Women Voter policy, the identity of the person asking the question is confidential. Audience members will have the opportunity to submit questions in writing at the event. Members of the viewing and listening audience may call with their questions during the Forum and a League of Women Voters member will print the called-in questions. The phone number will be announced during the Forum.