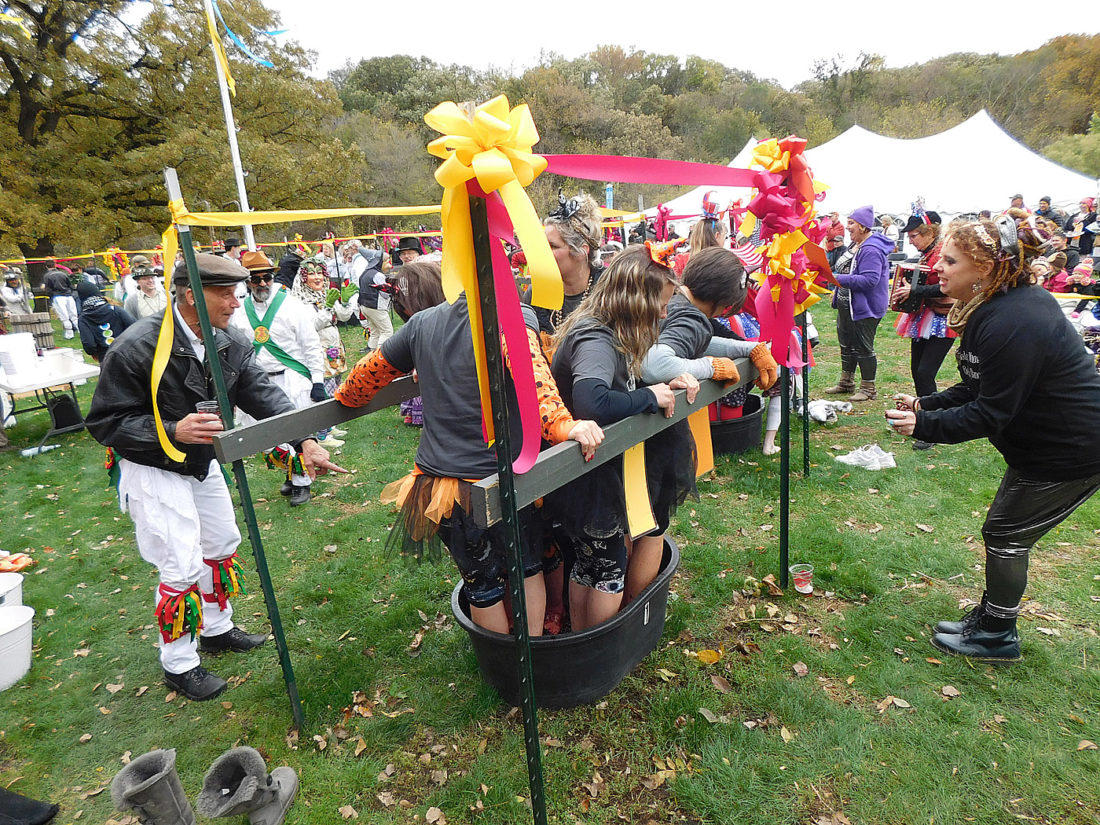 Staff photo by Clay Schuldt During the first grape stomp of the afternoon 10 teams competed to make the most grape juice. The first team, “Ide Stomp That” said they tried to squeeze the grapes rather than stomp, but this actually caused grapes bits to block the juice in the collection process. Team leader Lindsey Boettger said they now second-guessed this strategy.

NEW ULM — For many, Oktoberfest means beer, but at Morgan Creek it’s the perfect time for wine.

Each year during the first week of New Ulm’s Oktoberfest celebration, Morgan Creek Vineyard holds special Grape Stomp competition. Registered teams in festive costumes kick of their shoes, get in a tub full of grapes and compete to make the most juice.

The first stomp of the afternoon included 10 teams, each with a unique costume scheme and a different strategy.

“Ide Stomp That” tried to squeeze the grapes with their feet, but team leader Lindsey Boettger the plan was flawed as the grape bits stopped the juice flow.

Brenda Ruch, a four time champion of the stomp said squishing the grapes side to side is a better method to stomping up and down, but the type of and shape of the grape does play a factor. Also it doesn’t hurt to have big feet.

The winning team “Delicious Squishies,” said they used an ancient secret given to them before the contest. Team leader Ericka Todd said it was about speed. They used short and fast stomps to produce the most juice.

Other stomping competitions were held throughout the afternoon. In between stomps, guest at Morgan Creek were able to warm up by the heat lamps on the patio or try a fire grilled pizza.

Not everyone at Morgan Creek was there to stomp grapes. Some people came for the music, the food, the cheese and of course the wine.

The Satori Violet Belly Dancing team from Mankato entertained the crowds with their mesmerizing dance technique. The leader of the dance team, Violet Kind, said this was their second year at the Grape Stomp. It was fun, but challenging show as the dance team is performing for nearly three hours straight.

The Morgan Creek Grape Stomp is fast becoming a popular Oktoberfest attraction. Bus loads of visitors attended the vineyard every 15 minutes. The winery grounds offer a different flavor of fun than the traditional Oktoberfest fun.

Next weekend, the Oktoberfest fun will shift from Morgan Creek to the Schell’s Brewery.