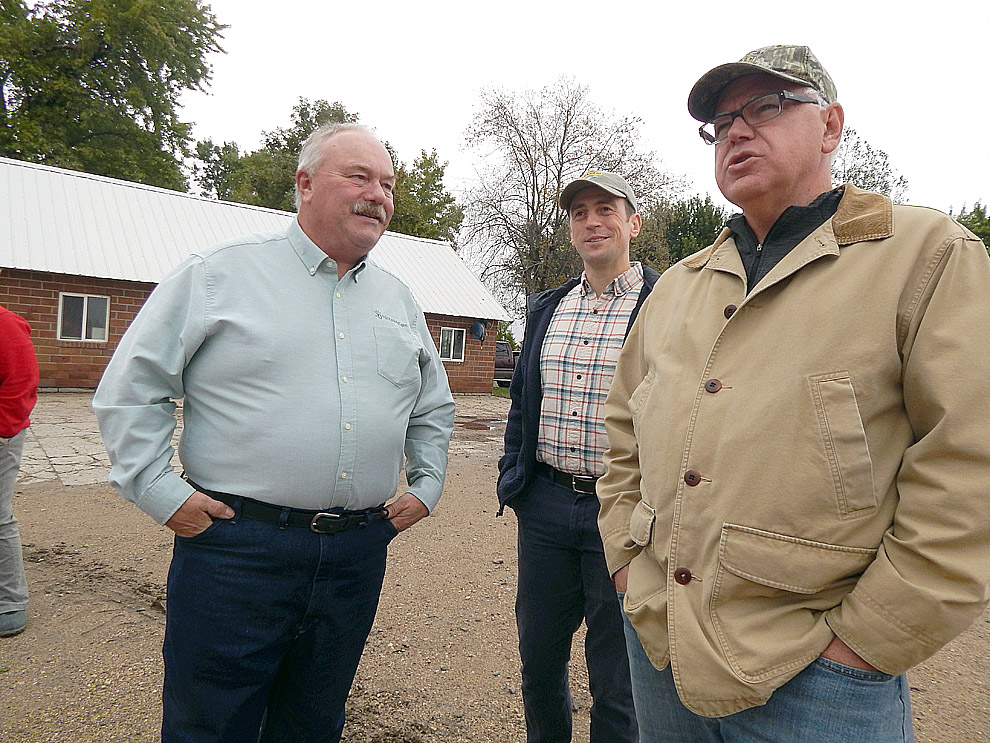 Walz asked Waibel, who farms corn, soybeans and raises pigs with his sons Justin and Jonathon, what keeps him up at night. Mary Jean Waibel does the farm’s accounting.

“Weather, prices and water on the (County Road 12) out here. And we’re doing (farm) succession planning now. We’re far enough along, it’ll be a family entity,” Waibel said. “The last few years, we’ve had great crop, but I’ve had to use crop insurance too. It’s a big issue.”

“It’s amazing what science will do. The science is there,” Walz said. “Follow the science and research. I know it’s a politically toxic topic, but we need it.”

Waibel said his farm is fairly diverse but that his biggest challenges are paying for health care costs, property taxes and making ends meet while maintaining his farm fleet. Last year, the family paid nearly $20,000 for health insurance.

They realize times are tougher now than they were a few years ago.

“We used to go out every Friday night as a family. We don’t do that every week now,” Mary Jean Waibel said. “I have a number of friends who operate niche retail businesses. They tell me business isn’t as good as it was right now.”

Walz said he’s had many conversations about highways.

“Highway 14 will get done. There’s a lot of needs around the state but it’s dangerous,” Walz said. “My next-door-neighbor was killed near Owatonna. Infrastructure investment matters. Right now, we need train space for soybeans. Locks and dams are 85 years old. One breakdown near St. Louis will shut down a soybean line and cost of tens of billions of dollars.”

Walz said the surest way to get highway funding is with a gas tax.

“We’re at 28-1/2 cents which is below the average for a state. We need an aggressive long-range plan. It’s an economic issue and a partnership with 55 percent federal investment,” Walz said. “Mississippi River locks and dams will be perhaps one of the biggest infrastructure projects in U.S. history. People kind of forget that the Mississippi River is so important now.”

“It was a powerful moment,” Feehan said. “The farm economy right now is in an incredibly difficult situation because of reckless trade policies. It’s on the backs of farmers. Plus, health care costs have risen. I don’t accept that.”

Walz said the president of the Minnesota Medical Association said they are not moving in direction of solving health care issues.

Feehan said the health care status quo is not working.

“In running for office, I’m taking the same oath of office I took as an Army officer, to support and defend the constitution and represent everyone,” Feehan said. “Every time I hear my opponent talk, the sense I get is he’s interested in being a rubber stamp and an extension of the Trump Administration.”

Feehan said Congress was designed to be an executive voice and an independent balance, which he said is why he is running for office.