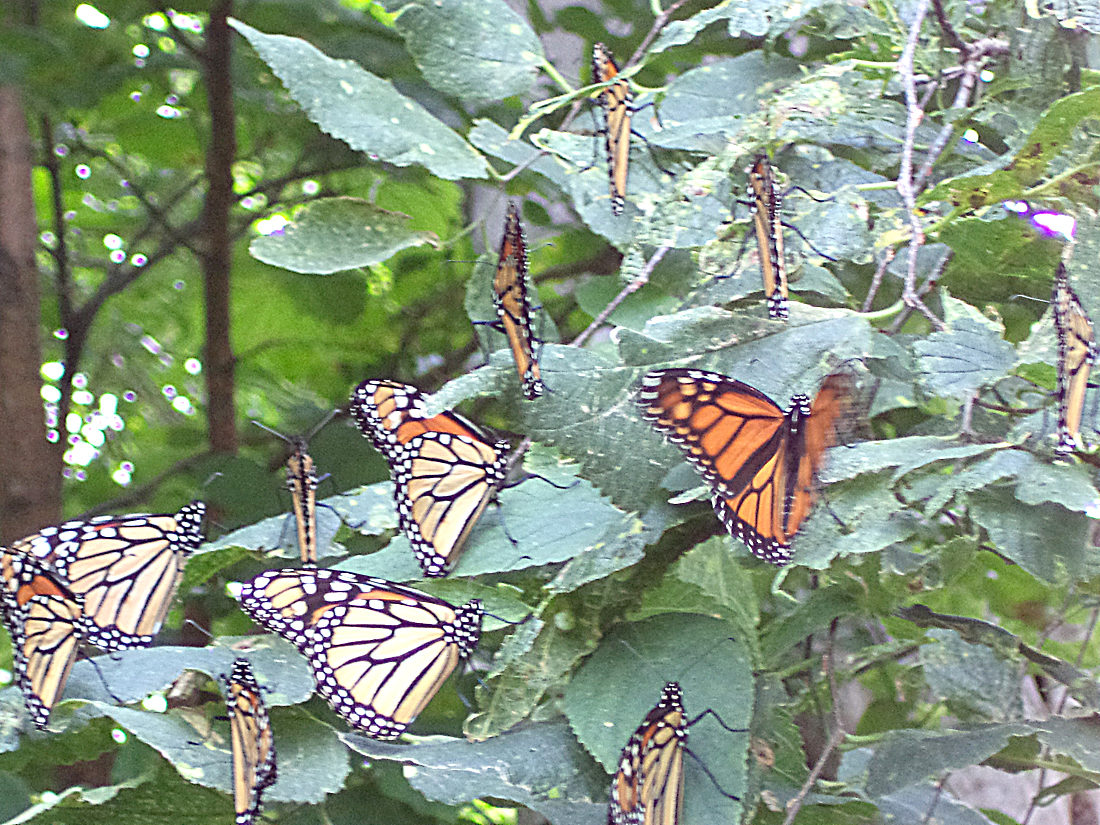 KLOSSNER — Myron Fluegge of New Ulm was in his farm garden three miles east of Klossner on Friday, Aug. 31 when he was greeted by hundreds of monarch butterflies.

“Most where perching in the trees on the north side of the grove. Others were filling up with zinnia flower nectar on the edge of the garden,” Fluegge said. “It was neat to see them fly out from the trees when I walked nearby, then they resettled in the trees.”

“Since we moved back to New Ulm in 2007, this is only the second time I have seen this many monarchs at one time near the farm garden,” Fluegge said. “I think it was just a coincident that they stopped off at my brother’s farm grove to take a break while I was out there.”

“The ones that hatch after mid August don’t reproduce, but begin to migrate south. They often gather or stage in large groups,” Gelvin-Innvaer said. “When I first moved to New Ulm, I noticed them as if they were leaves on trees in the fall. They are headed to their over-wintering grounds in Mexico. They’ve never been there before, but somehow, they find their way.”

Gelvin-Innvaer said the number of monarchs traveling together is triggered by caterpillar food sources. She said adult monarchs feed on a variety of flowers.

“Females lay eggs only on milkweed plants, which are getting to the end of their prime now. It’s time to migrate,” Gelvin-Innvaer said.

Otherwise solitary, monarchs often cluster at night while migrating southward. If they linger too long, they won’t be able to make the journey. Cold-blooded, they are unable to fly in cold weather.

As they migrate south, monarchs stop to nectar and gain weight during the trip. Some researchers believe they conserve energy in flight by gliding on air currents. Nobody knows just how their homing system works.

Monarchs live in field and parks where milkweed and native plants are common. Since monarchs feed on flowering plants, many homeowners are converting part of their backyards from grass to flowers to help the butterfly population.

Each fall, tens of millions of monarchs including those from Minnesota, migrate to wintering grounds west of Mexico City.

Researchers say as many as 50 million monarchs migrate south each fall.

In addition, she said the DNR is a partner in the Monarch Joint Venture (MJV) that encourages the public to incorporate conservation measures for monarchs and other pollinators on public and private lands.

To help counter the loss of monarch breeding habitat and conserve monarch butterfly migration in the United States, the MJV is growing the supply of and demand for native, regionally-sourced milkweed plants and seeds.

The 2018 Monarch Conservation Implementation Plan identifies and prioritizes important actions for U.S. monarch conservation to facilitate cooperation and coordination among diverse organizations working together to accomplish our nation’s monarch and pollinator goals.

More than 75 conservation, education and research partners from across the United Staes are working together to conserve monarch migration under the MJV.

For more information on creating habitat for monarchs, visit https://monarchjointventure.org/get-involved/create-habitat-for-monarchs.