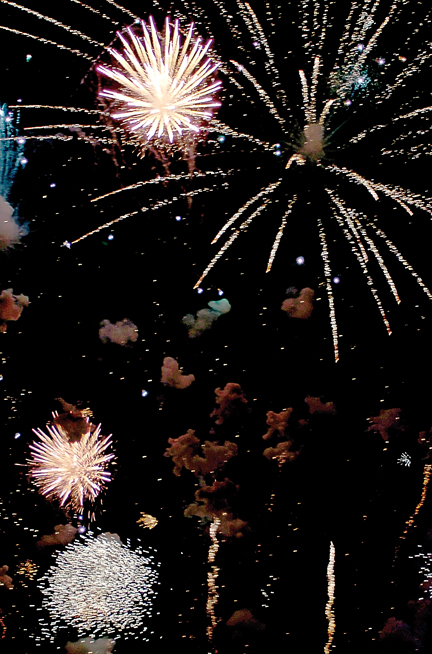 The Original German Band started off the music with a few polkas. Partway through their set, an unusual sight at the park was explained.

Arnie Lillo, appropriately from Good Thunder, brought what he calls the largest firing rifle in the world.

Mounted on a trailer was a 36-foot metal facsimile of a 30-30 Winchester lever action, model 94, rifle.

The 1,200 pound brown-and-black gun fired using a cannon in the front end of the barrel.

Lillo, who works with metal professionally, made the gun in three months. It started as an idea for a lawn ornament and eventually evolved into a mobile show.

Around 6:30 p.m. Bryce Stenzel read the Gettysburg Address as he was dressed as President Abraham Lincoln.

Around 11:30 a.m. the Concord Singers started things off when they filed up onto the stage made from two modified semi-trailer boxes that had the sides replaced with heavy curtains.

Manager Virginia Suker Moldan was optimistic about turnout early on because most people are still around on a Wednesday.

As thunder warned of imminent rain, Suker Moldan took a moment to inform the crowd that the food and music would be moved inside for a time.

This was the first time in at least a dozen years that the festival was held inside, Suker Moldan said.

That did not last for long. After about an hour, the Schell’s Hobo Band set up again outside to continue their music into the afternoon.

While rain pushed attendees at Turner Hall inside, Cambria’s parade continued with only a modest sprinkling.

The candy-seeking children were not deterred as the parade completed its double circuit of the town.

After the parade, Cambrians gathered in the town hall for songs, speeches and the annual cake auction.

On metal folding chairs, under a few banks of fluorescent lights, residents listened to a few speakers including guest speaker Kyle Marti.

Marti is in the Army serving in special operations. He talked about his experiences in locations from Honduras to Iraq and Lebanon.

He spent a lot of time training other troops to help fight cartels in Honduras or aid Lebanese fighters drive out ISIS.

“One guy asked me, ‘why do you guys come here, it is not your war, why are you fighting this?'” Marti said. “You have to think about it for a while, and I said, ‘well, I guess you try to stand up for people who cannot help themselves. I guess that is kind of the whole dream of America, it is kind of what you do.'”

After a few more patriotic songs, the annual fancy cake auction kicked off. With just under 20 cakes, cookies and kohlrabi, the fundraiser grossed about $2,365, surpassing last year’s total of about $1,968 by $397.

It was a chocolate espresso cake with espresso mousse and chocolate ganache, pulling in $390.