Staff photos by Clay Schuldt Sam Schotzko as Nicely-Nicely Johnson leads the congregation of gamblers in “Sit Down, You’re Rockin’ the Boat.”

Staff photos by Clay Schuldt Sam Schotzko as Nicely-Nicely Johnson leads the congregation of gamblers in “Sit Down, You’re Rockin’ the Boat.”

Noah Thompson as Nathan Detroit and Emma Henle as Sarah Brown meet at the prayer meeting at the local mission.

NEW ULM — Next weekend Cathedral High School’s theatre department will be all about dice and dames as they perform “Guys and Dolls.”

“Guys and Dolls” is a Tony Award-winning Broadway play, based on short stories by Damon Runyon about the street characters in New York. It was first performed in 1950 and was adapted into a popular film starring Frank Sinatra and Marlon Brando.

In the musical, gambler Nathan Detroit (played by Noah Thompson) needs $1,000 to pay a garage owner to host his floating weekly craps game. He makes a bet with Sky Masterson (Tony Geiger) that Sky cannot get virtuous Sarah Brown (Emma Henle) out on a date. Nathan also struggles to commit to his longtime fiancée, Adelaide (Grace Gleisner), who wants him to go legit and marry her.

The play is directed by husband and wife team Michael and Christina Koester. The Rev. Garrett Ahlers is serving as the voice director, Gary Sassenberge is the choreographer and Margret Blomberg is the costume makers. Tamara Klawitter is providing hair and make-up; Matt and Jessie Sobania were set to design and Lauren Curtis worked scenic design.

“Guys and Dolls” is one of the largest productions put on by Cathedral in years. The two-act show features multiple sets of changes, elaborate costume design, singing and choreography. 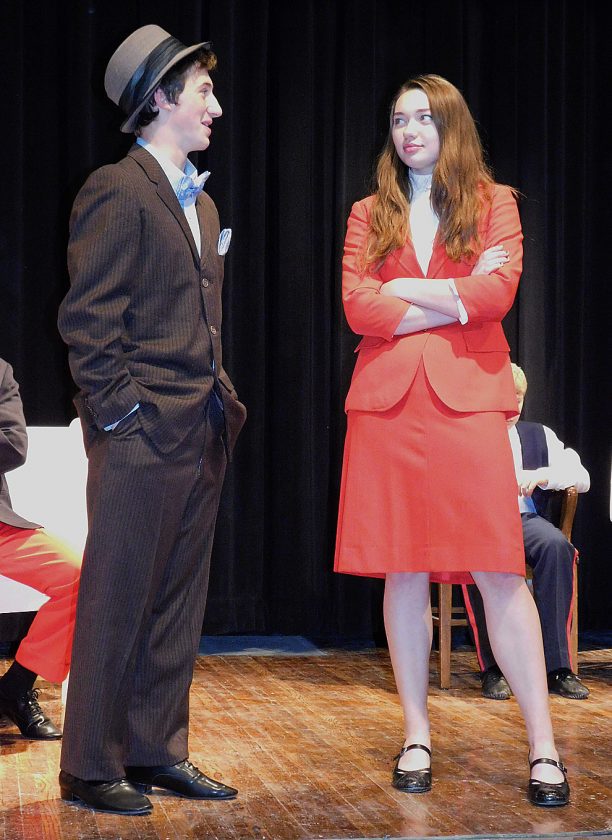 Noah Thompson as Nathan Detroit and Emma Henle as Sarah Brown meet at the prayer meeting at the local mission.

Due to the complex nature of this production, the cast and crew for “Guys and Dolls” started production in July.

The musical has 33 student cast members. Some are veterans to Cathedral’s theatre department, but the majority of the cast is new to the stage.

“We were surprised with the audition,” Christina Koester said. Several of the school athletes came in to help as crew only to become part of the cast. “We had a lot of football and soccer players audition.”

Fr. Ahlers was impressed with their dedication. He said sometimes the football players would come to rehearsals even after practices or weight training. 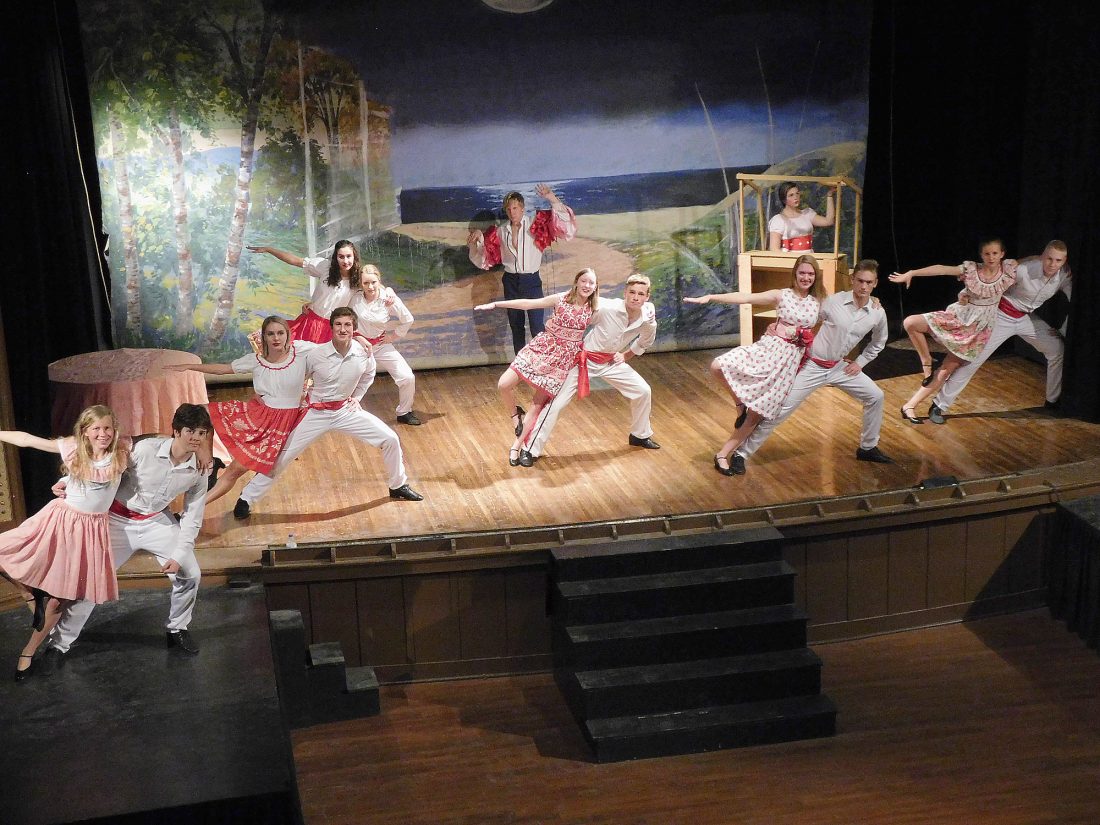 “For the students, the greatest challenge is this is the first play, and it is demanding and is so involved,” Ahlers said. “But they are rising to the challenge.”

Ahlers has a history with “Guys and Dolls.” He first worked on this play 15 years ago in high school. He was part of the pit orchestra then. He said it has been fun to revisit.

Co-director Michael Koester is also revisiting “Guys and Dolls.” He directed the musical at Martin Luther College a few years ago.

“I wanted to keep it simple and do it the same, but the students have their flavor they bring to the material,” Koester said.

Koester said he is excited that this product will be more complete than the MLC production, as he was forced to cut “Crapshooters’ Ballet” from the previous production.

Michael Koester said the dancing style for this production is intense.

“For a high school production, you don’t usually get this level of choreography,” he said. “That’s a testament to Gary Sassenberg.”

Michael and Christina both praised Sassenberg’s work as a choreographer. He was tasked with teaching a troupe of student actors the dance styles for multiple scenes.

Christina also praised costume designer Margaret Blomberg for her work. The entire cast needed to dress in period-era clothing. NUACTS costume department had the hats needed for the production, but some of the costumes needed to be created from scratch. The costume work especially shines during the “Havana” dance number.

Audiences will be able to see performances for themselves next weekend. The show opens at 7 p.m. Friday, Nov. 8 with further performances at 7 p.m. Saturday, Nov. 9 and 2 p.m. Sunday, Nov. 10 at Holy Trinity Auditorium. Tickets are available at the CHS Office. K-12 student tickets are $5, adult tickets $7 and reserving seating $10.

A pre-show dinner at the Runyonland Cafe includes reserved seating at Saturday’s performance at 5:30 p.m. in Leifeld Hall. Dinner and show are $20.