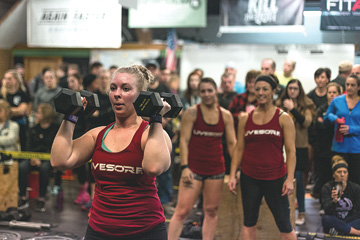 NEW ULM — Shortly after his wife Brandy joined CrossFit, Jeff Toomer knew that he too wanted to see what all the hype was about.

So Toomer joined seven years ago in Mankato, and now he’s the co-owner/head coach at the New Ulm CrossFit location, a job that has enabled him to gain friends all over in what is called a fitness community.

The New Ulm CrossFit will celebrate its fifth anniversary on Feb. 15. The business, which is located at 509 20th North Street, recently held a big competition, drawing athletes from all over the upper midwest.

On Jan. 12, New Ulm CrossFit hosted 105 competing athletes along with 30 volunteers, several vendors and many spectators for the Granites Games. The event was held at the New Ulm CrossFit gym, or “box” as the CrossFit gyms are called. It started at 8 a.m. and concluded with awards around 4 p.m. The competition was for same sex teams of three (three men per team or three women per team) and had two divisions for both men and women.

After months of planning, Toomer designed the local competition. The Granite Games team made the workouts so all boxes across the country had the same standards and everyone was ranked in a pool of about 5,000-plus athletes. 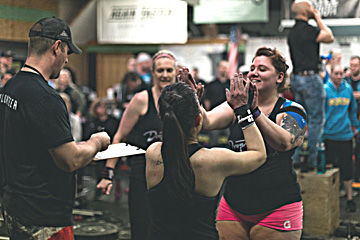 Toomer was in charge of setting up the local competition and it was a rewarding experience for him in the end.

“The event was a little nerve-racking in the set-up phase, but was very exciting when it came down to show time,” Toomer said. “I did not compete in it as I was the ring leader for the event, but we had nine teams of three from our home box compete on the day of.

“It was a lot of work to set up the event and was definitely a challenge as I had never hosted or taken on an event of this magnitude,” Toomer said. “But I had a blast doing it. We had the right people helping in the right places at all the right times to make sure we had a fun, smooth event.”

“Some of the beginner athletes who had never competed before signed up just because the event would be in our home box and now they want to do more,” Toomer said. 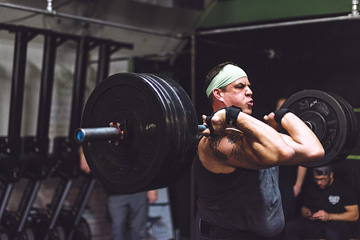 Toomer said that the CrossFit community works together and they all support each other.

“This was definitely an opportunity to meet people who share a passion for fitness/health and friendly competition,” he said.

With CrossFit, the biggest challenge isn’t inside The Box. Rather, it’s what takes place before that — talking yourself into trying it.

“Joining CrossFit is very easy, the hardest part about CrossFit is convincing yourself to walk in the door and talk to us,” Toomer said. “It is actually very easy to get started. I start off everyone with a foundations session where we go over the flow of a typical day, some of the lingo, and several of the basic movements that will be done on a regular basis. After that is done and deemed successful the new ‘athlete’ (that’s what we call all of our members) has the option of how often to attend and they jump right in with the coach’s guidance. We lead everything, from the warm-up and mobility to the skill sessions and workouts. You are never left alone to figure out what to do.”

Toomer said there is a sense of community with CrossFit.

“I think people seek out CrossFit for a multitude of reasons (strength gain, fat loss, better test results at the doctor etc.), but I think what keeps them coming back is the results, the challenge, the camaraderie, the fun and the sense of family,” Toomer said. “You don’t get to hit a hard workout and walk out the door without a high-five. And our occasional parties don’t hurt either.”

The workouts can be set up to each individual’s personal requirements.

“The workouts we do are constantly varied, functional movements performed at each persons relative intensity,” Toomer said. “We use movements that relate to every day life and change the style of workout often so that your body can’t get too accustomed to it. We also scale the workout to fit each person’s ability level so the 22-year old collegiate athlete can workout right next to the 90-year old grandmother. That results in less plateaus and more results.”

What are the Granite Games?

Toomer said that the Granite Games is a competition held once per year. There is a vetting process where an athlete can do online qualifying workouts and turn in their score hoping to qualify and then there are a few spots left open for open sign up as the event gets closer.

“This event usually hosts over 2,000 athletes ranging from professionals to your every day athletes from right here in New Ulm and other rural areas,” Toomer said. “I personally have been on a team of three for three years at this event. They even pull athletes from other countries.”

This year they decided that a way to get other “less competitive or beginner athletes” involved was to have local “boxes” to host throwdowns for these athletes that either couldn’t make it into the Granite Games or didn’t want to go to something that big. So, in essence, these were designed anyone who just started CrossFit recently and wants to try a competition as part of a team.

There were 55 locations around the country that hosted one of these beginner events. Toomer said that the event at New Ulm CrossFit let people experience the thrill of competition with the strength of an entire community at their back. 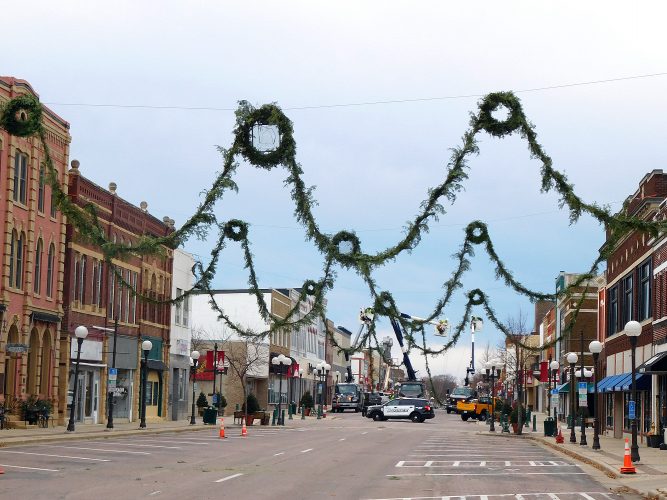 Decked out for Christmas one last time