With many hats to wear, the lifestyle of a high school Activities Director is one that is always Balancing a full schedule 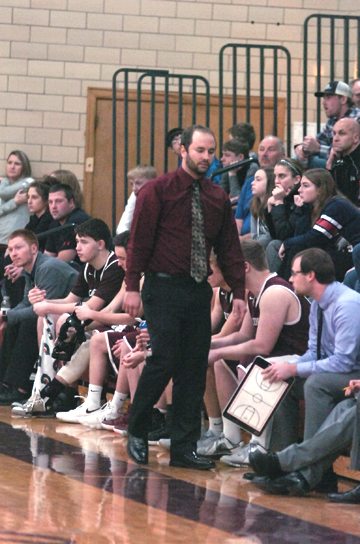 Staff photos by Steve Muscatello Alan Woitas is the Activities Director at New Ulm Cathedral Aside from his AD duties, he has filled various roles within the school, including coaching positions. Woitas has been the AD at Cathedral for five years.

Staff photos by Steve Muscatello Alan Woitas is the Activities Director at New Ulm Cathedral Aside from his AD duties, he has filled various roles within the school, including coaching positions. Woitas has been the AD at Cathedral for five years.

Staff photos by Steve Muscatello Cory Haala is the AD at Sleepy Eye High School. Haala has had the role for 14 years at Sleepy Eye.

While the role of the Activities Director at the high school level is constantly changing, three area ADs seem to balance their role as an AD, teacher and coach without much trouble.

New Ulm Cathedral’s Alan Woitas, Sleepy Eye’s Cory Haala and Springfield’s Paul Arnoldi balance all of these roles and more and they’ve had a lot of success while doing so.

Woitas has been the AD at New Ulm Cathedral for five years. He teaches three math classes and he is charge of the MathCounts program for students in seventh and eighth grade. He also serves on committees for school fundraisers (Snowfest, Pumpkinfest) along with various other small jobs throughout the year.

His many roles gives him a chance to meet people from various walks of life. Being an AD, he knows it’s important to make a good impression on everyone in the school and the community. 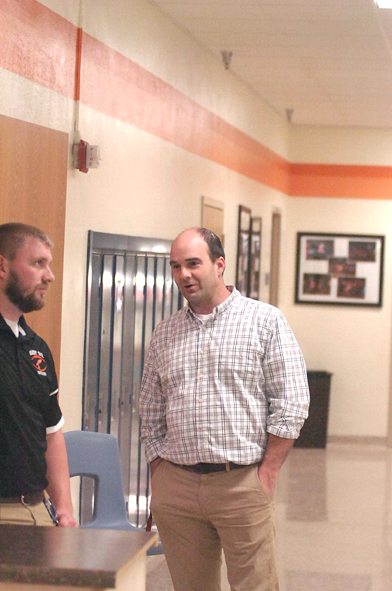 Staff photos by Steve Muscatello Cory Haala is the AD at Sleepy Eye High School. Haala has had the role for 14 years at Sleepy Eye.

“I think being approachable and making yourself available to meet with fans, parents, and students is a large aspect of your job,” Woitas said. “There are so many people that are affected by our programs here at Cathedral and many more that are supporters of those programs. It is our job as an AD to constantly try to grow those programs in a positive direction and receiving input from fans, parents, and students is part of that process.”

The 2006 Sleepy Eye St. Mary’s graduate and 2010 Gustavus Adolphus College graduate is also the head boys’ basketball coach at Cathedral. He’s been the head coach for five years and he’s been the B-squad baseball coach for six years.

Woitas had somewhat of an inside track to becoming an AD. His dad, Bruce Woitas, is the longtime AD at Sleepy Eye St. Mary’s so he knew the kinds of things that can happen in that role.

He’s been influenced by several current and former ADs and that has helped him.

“I have had many people help me in my first years as an activities director to learn the ropes,” Woitas said. “John Vetter who was the AD at New Ulm Cathedral before me was a great sounding board to bounce questions off of and to learn what it meant to be an AD at NUC. My dad, Bruce Woitas, has been the AD at [Sleepy Eye St. Mary’s] for many years now and has also been a great resource for me to go to with questions. 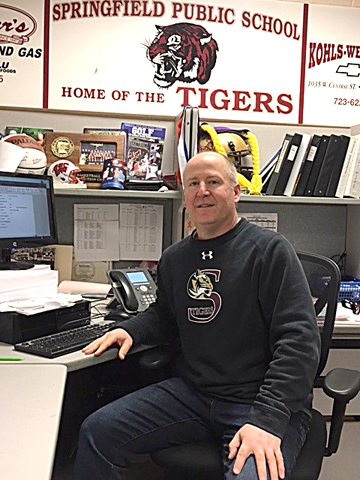 “The Tomahawk Conference has many great ADs that have done this job for many years that are willing to offer advice on situations that arise,” he said. “All of these people have the same common goal in mind and that is to provide a positive experience for students competing in high school athletics.”

While Woitas is a newcomer, Haala has been an AD since 2003. He’s also the school’s football coach, a job he’s had since 2004 and he’s an assistant baseball coach. He’s also been the head coach of the softball team and has helped coach junior high basketball.

A 1990 St. Mary’s High School graduate and 1995 graduate of Mankato State University, he currently teaches physical education as one of his many roles in the school.

He too is aware that his duties are important for everyone in the school and he tries to focus as much attention as he can on the students. 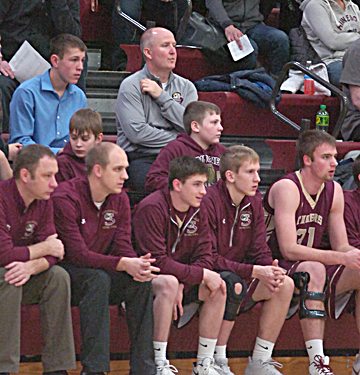 “As an AD and as a coach you cannot only define success as winning conference and state championships,” he said. “Those are nice goals to have and strive for but not always possible or realistic. My hope is that we can provide a positive experience for our student athletes. It is very fulfilling as an AD to see kids mature and develop and achieve their individual and team goals.

“[Sleepy Eye High School] is a small school, I prefer to see multiple sport athletes. Sports specialization in many cases is wrecking high school sports. We do our best to promote not only all sports but fine arts as well; hopefully there is something for everyone. Ultimately you want to see kids leave high school and be successful with their academic college goals or their work force goals because rarely will a student athlete play professionally or even play sports at the collegiate level.”

Haala learned a lot about the position from former Sleepy Eye AD Dean Deibele. Both shared the role before Haala took it over for good.

“When it transitioned over to me we shared in some responsibilities during the school day and in particular game supervision,” he said. “When I transitioned to full-time AD by myself I was fortunate enough to still have him in school to lean on for advice and support. The ADs in the Tomahawk Conference are also a great bunch of guys to work with. I have also been fortunate to work with some great coaches, players, parents and administrators.”

He also said his job is one that keeps him busy all year.

“Being an AD can be hectic, I think sometimes people assume teachers, coaches, administrators and school personnel work during the school year only,” he said. “The job as an AD is very demanding on your time, it is 12 months out of the year and many days you go to school in the dark and leave in the dark. Weekends are very common as well.

“I remind myself there are a lot of hardworking people that make a school district work it takes collaboration, teamwork, we all have our job to do,” Haala said. “I know many small school ADs are in the same boat as myself, they are not just the AD, they carry many hats. In my case I am also very fortunate to have an understanding and supportive wife and family they like me are at school a lot so it becomes a way of life.”

Many sports fans in the area recognize Arnoldi as the longtime girls’ basketball coach at Springfield. He coached the program for 21 years, stepping down in 2015.

The Lamberton High School graduate (1985) and St. Cloud State graduate (1990) took over the AD position six years after Brady Schwab left. He teaches mathematics for 10th and 11th-graders and is also the boys’ golf coach along with being an assistant coach for the football team.

Like Woitas and Haala, he too has a full schedule of activities that goes beyond sports.

“I am responsible for overseeing our activities-drama department (we offer a fall play, One Act Play in the winter, and a Spring Play), knowledge bowl, mock trial, speech just to name a few,” he said. “Besides the normal AD duties such as scheduling events, hiring officials, recommending and evaluating of coaches, scheduling transportation, and the supervision of events, I am responsible for the inventory and the scheduling of our concession stand workers and ticket takers, who are all volunteers (parents of our athletes). I am on the safety committee, Rec Complex, and am a part of the Springfield Education Foundation, which runs our annual Tiger Pride golf tournament, a major fund raiser for our activities department.”

Arnoldi takes pride in his students’ achievements both in activities and in the classroom. He also mentioned that the Springfield facilities all have new scoreboards and the athletic programs continue to do well.

“I love watching our students compete and the enthusiasm and pride that our student body has for our athletic teams and activities,” he said. “I am proud of all of our coaches and am very appreciative of their efforts and their passion to make sure all our students are having positive experiences representing our school. I am also very proud of what we have been able to do with our athletic facilities through the generosity of our businesses, community, and school board. We have been fortunate to put up new scoreboards at our football field, baseball field, softball field, and in our high school gym all in the last five years. In that short time, we have re-done both of our gym floors, and enhanced our auditorium with lighting and sound upgrades.

“Our programs and kids have had many successes at the conference, section, and state level, and have been able to participate at many of the different college and professional venues in the state of Minnesota.”

Most important, it’s comes down to the kids.

“In this role, you have to love high school sports and all that goes along with it, and I certainly do,” he said.