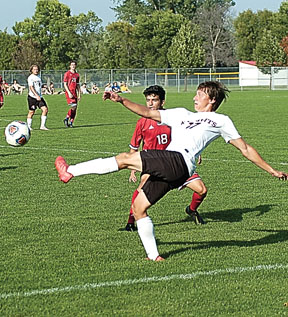 NEW ULM — Just a freshman, Bethany Lutheran College forward Jack Busch is poised to be a nightmare for his opponents in the Upper Midwest Athletic Conference for the next four years.

The physical forward showed Martin Luther College just how tough he was to defend as he scored four times. Bethany had no problems with MLC in a 7-0 rout of the Knights on Tuesday at the MLC soccer Complex.

The Knights never were in the game as the Vikings jumped out to an early lead and led 5-0 at halftime. Busch scored the first three goals of the game for the Vikings and he now has 10 goals for the season.

Busch set the tone early for the Vikings (4-2), scoring his eighth goal of the year just 3 minutes in.

About eight minutes later, Busch scored his second goal and he later made it 3-0 at the 18-minute mark. The Vikings added to the lead when Rudy Lopez scored his first goal of the season with three minutes left in the half to make it 4-0.

A little more than a minute later, Marcel Campabada scored his first goal of the season for the Vikings on an assist from former New Ulm High School soccer player Jonny Sehloff.

The Vikings continued to put the pressure on in the second half, scoring twice more. Busch and Luuk Oosterbosch added goals for the Vikings. Oosterbosch had two assists and Samuel Duran had three assists for Bethany.