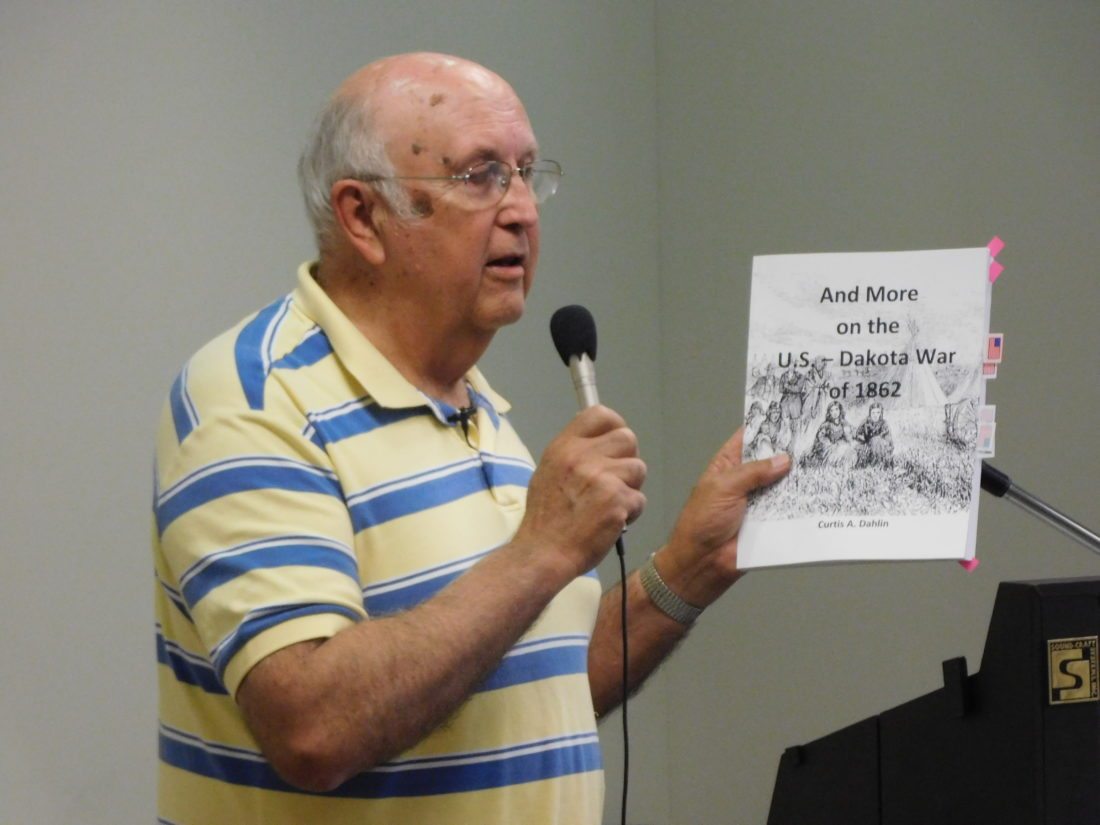 NEW ULM — This week the Brown County Historical Society is commemorating the anniversary of the U.S.-Dakota War of 1862 with a series of lunch-time programs.

Dahlin has written multiple books on the conflict that began in August 1862. The latest book is a continuation of a previous book which detailed eyewitness accounts of the conflict. Dahlin compiled miscellaneous testimonies from individuals who experienced it first-hand. It also includes testimony of the Dakota at their trials and questions of how history could have been different if the conflict went a different way.

Many of the eyewitness accounts Dahlin read were from Dakota people expressing conflicted feelings about the war. Some of the Dakota had good relationships with the white settlers and refused to fight; others warned white friends to flee.

In the aftermath of the conflict the white settlers were upset with the natives. Testimony from Gov. Alexander Ramsey and Gen. Henry Sibley expressed a desire for revenge against the Dakota people, but Dahlin feels there was significant restraint from the U.S. military.

“There were quite a number of junctures where the whites could have taken revenge,” Dahlin said.

In some cases there were plans among the soliders to take revenge but they were stopped by Sibley.

In the book Dahlin theorizes about how the conflict could have gone differently. He said the conflict was not inevitable. The conflict began over simmering tensions over annuities payments owed to the Dakota people. The killing of five white settlers on Aug. 17, 1862, by four young Dakota men was the tipping point that led to war. Dahlin believes if these killings had not happened, the annuity payments would have arrived on time and the war prevented.

Dahlin said if New Ulm had fallen during war, the retaliation against the Dakota would have been more extreme.

Taking questions after his presentation, Dahlin was asked if the Dakota had any plan for keeping the land if they won the war. He believes the Dakota were only thinking of driving out the white settlers from the land. Dahlin suspects that many of the Dakota leaders knew this was a futile effort. Little Crow and other Dakota leaders had visited Washington, D.C., to negotiate treaties. They would have known the size of the country and resistance they faced.

The U.S.-Dakota War commemoration week continues today with a 12 p.m. presentation by John LaBatte on the relationship between the Dakota and white settlers before the war. The presentation will be held at the Museum Annex.

A traditional Dakota gardening presentation by the Lower Sioux Agency will is at 8:30 p.m. today at the Dyckman Free Library in Sleepy Eye.

NEW ULM — The New Ulm City Council is expected to seek bids for the Hermann Heights portion of the RENU project, ...

GIBBON — The Gibbon Fairfax Winthrop (GFW) school board will hold a public hearing on Monday, Feb. 3 on the ...