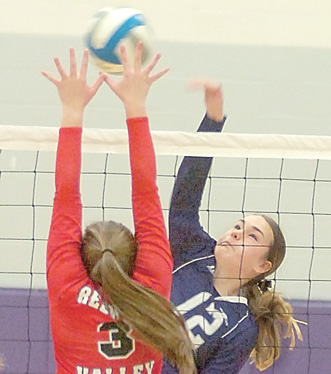 NEW ULM — Despite a first-set victory against Big South Conference rival Redwood Valley, New Ulm was unable to keep that momentum going and ended the regular season with a loss. Redwood Valley defeated New Ulm 14-25, 25-22, 25-17 25-20 on Monday and New Ulm slipped to 10-13 on the season.

New Ulm trailed early in the first set and the teams traded points most of the way through, but New Ulm took control thanks to some good passing and mixing up the offensive attack at the net. Up 20-13 thanks to a Cardinals hitting error, the Eagles didn’t let up and won the first set on a Nora Windschill tip and some late hitting errors.

“We served the ball really well and I think we did everything very well in that first set,” New Ulm coach Stef Dietz said. “I think the difference in the last three [sets] was that we dug ourselves a hole. Sets two and three was a five or six-point hole and we just couldn’t come back from that. You play teams like that, it’s hard to come back.”

However, the Cardinals showed why they entered Monday’s play with a 22-5 record and rebounded in the second set. They grabbed an early 6-1 lead, but the Eagles rallied and eventually took a 10-9 lead on a kill by Windschill. Up 15-13, the Cardinals grabbed a 20-18 lead. They eventually went up 23-19 and finished out the set 25-22.

New Ulm led 9-5, but the Cardinals soon tied the set at 10-10 and eventually led 19-11. The Eagles made it interesting at the end, but it was too late at that point as the Cardinals improved to 23-5 on the season.

New Ulm travels to Windom for its first round match in the playoffs on Thursday.