Knights storm past Raiders in 3 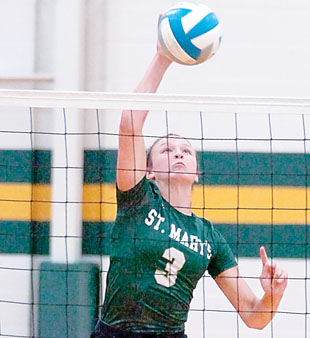 “I was proud of our energy,” St. Mary’s head coach Jen Walter said. “We played well, served well and we were aggressive.”

Both teams played even for most of the first set. There were five ties and Nicollet briefly held the led Reagan Severson had two consecutive ace serves during a 10-0 run by the Knights. St. Marys’ front line dropped the ball between some Raider defenders to start the run. A combination of Nicollet mistakes and solid defense by St. Mary’s were key ingredients for the run. A kill by St. Mary’s and a missed return by Nicollet were the final 2 points of the set.

The Knights grabbed the lead early in the second set. They slowly pulled away from Nicollet with timely returns, solid defense and remaining aggressive.

Severson’s serve hit the net, which gave Nicollet a point and brought it within 2 points. St. Mary’s earned the final points on two Nicollet unforced errors, a solid front-line block and a soft drop for the final point.

The Knights jumped out to the lead in the third set. Nicollet refused to quit as it clawed back into the set, tying it up four times. Nicollet earned the final tie when a Knight knocked the ball out of bounds.

St. Mary’s responded with a 7-0 run. The Knights remained focused by taking advantage of a few Nicollet mistakes and earning timely points. Severson’s serve dropped inbounds, making it 24-16. A Nicollet player hit the ball into the net for the set and match win.

St. Mary’s (4-2) will host New Ulm Cathedral on Tuesday. Nicollet (1-2) will play at Alden-Conger on Tuesday.